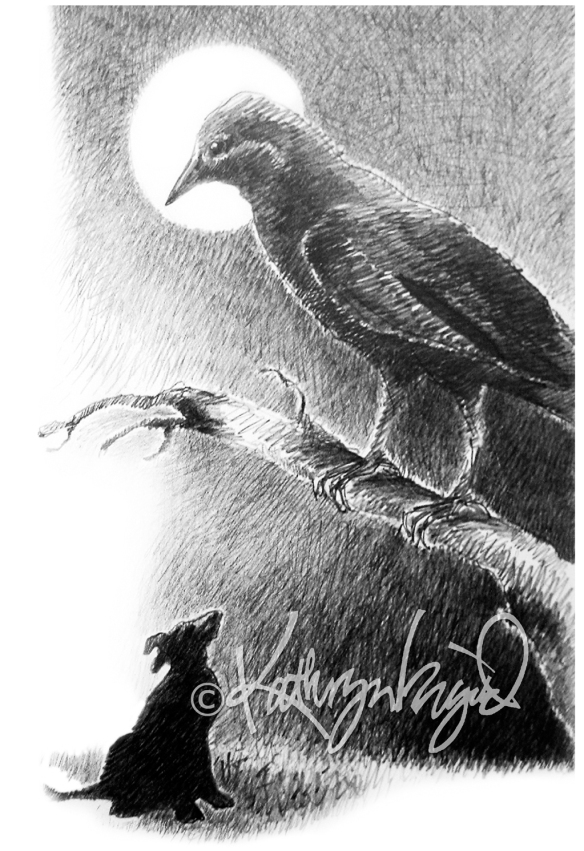 Who’s looking after whom?

Some people might say I was Raised by Wolves. Insiders say, in a cheerier tone, that I was Raised by Wolds. The strange truth is that, though I have lived my entire life thus far without having “owned” a pet since my late lamented goldfish, I have been nurtured throughout my years by various cats and dogs.

There was that one goldfish, true: Patrick Richard. What, you don’t think that’s the most obvious and logical name for a goldfish evah?? Suffice it to say that the fish was simply named after the school friend who bestowed it on me. I’m pretty sure I must have had a crush on him, the boy I mean, to have named a fish such a thing, but then I was never the most conventional of children. Perhaps the whole goldfish episode was simply precursor to my much later fish-and-pencils phase of artworks. In any event, Patrick Richard had a rather short career as my pet and might be presumed to have expired of overindulgence, since if I recall correctly he grew quite large quite quickly until the day when I came home from school and his ample orange belly was topside-up. I gave him a simple and dignified burial out behind the house that evening, the funeral if any somewhat truncated by my bare foot landing on a slug out there in the dusk, prompting a quick dash back into the house. I don’t think I went back out and erected a monument or anything.

The companion animals that played larger (and generally longer) roles in my life belonged, then, to others. It mayn’t have prevented me from forming attachments, but I suppose I don’t have the same deeply familial link with them that I would have had I taken full responsibility for the animals’ well being.

When I was still in the midst of grade school, it was the semi-rural setting where we lived that provided the most constant access to “pets” of this sort. There were always pastures within a quick walk from home, where I could linger at the fence and feed grass or fallen apples to the horses and cows that would come over for a friendly trade of nuzzling and scratching. Some pastures were particularly close: when we moved back to western Washington from Illinois and I was about twelve, we lived for a while in an old parsonage that sat between the older chapel and a modest and uneven pasture where a shaggy little pony kept company with a handful of grazing cattle. One morning when Dad was getting ready to head over to work, he came into the kitchen and there on the back stoop, gazing in the window curiously, was the enormous bull, who had escaped from next door. Apparently he thought a cup of coffee and a bowl of cereal would be preferable to puddle water and a salad of pasture greens.

All of this was good company, and very pastoral indeed.

Cats around there were primarily those accustomed to keeping down the rodent population and reminding the dogs of their place in the hierarchy of the universe. Dogs, those were decidedly the most individualistic and interactive of the beasts around my neighborhood(s) as I grew.

The first dog of importance in my little life was undoubtedly my cousin’s funny little cockapoo Raskal. He was among the first in what would become a designer-dog race, very possibly because his sire and dam had no clue about pedigrees and just did what comes naturally to any self-respecting dog. But since Raskal arrived before anyone had ever heard of the phrase “puppy mill” or worried much about the genetic time-bombs in designer breeds, I think he was designed by Mother Nature strictly to be a truly fun play companion and to think of life as one big exciting adventure after another. When he wasn’t too busy being passed around from one admirer to another for his extreme cuteness and friendliness, he was very willing to work hard at attempting to “dig out” any kid that happened to be trapped in the impenetrable prison of a closed sleeping bag, or to romp off on all sorts of mini-adventures, his body trembling with happiness and his curly blond coat rippling like he was on fire. His was a short tenure on earth: driven by his (aptly named) rambunctious energy, one day he dashed up over a blind hill and right under a car when we kids were once again all on an outing being led with aimless and artless abandon by his lightning-bolt zipping. But in that too-short life he still managed to imprint himself and his boundless good cheer and infinite thirst for play on all of us. He was surely a better teacher and good influence than a whole lot of sober grownups can be!

Another in my pantheon of Great Dogs was the next-door neighbors’ Dutchess (their spelling, not mine–is there a theme of distinctive spellings among my dog friends?). She did indeed have a certain regal aloofness. As a half-coyote mix (again with the pioneering hybrids), she expressed her royalty with either disdainful avoidance or, more likely, with a couple of sharp barks and a good growl or two, when anyone approached the property. I was traditionally rather over-cautious around dogs myself, having been knocked over and winded when small by a not-so-small farm dog that seemed to be considering whether I would be tasty or not when my parents retrieved me. So when I met Dutchess, and for some time thereafter, I took my time about getting very close. But I think she appreciated my deference, because after I babysat at her house (for her young human charges) a time or two she seemed to decide that I was acceptable and even became rather kindly toward me and a little bit protective of me if I happened to come by with anybody else in sight. It wouldn’t by any measure be considered a close and cuddly and playful relationship, but the fact that this rather fierce and solitary little creature treated me as accepted and respected company and even let me stroke her thick coyote fur collar meant a great deal to the person I was at that age, another somewhat solitary soul.

On the other side of our house were the neighbors whose dog Tar was the polar opposite of Dutchess, the local extrovert, the neighborhood captain of entertainment. He was still clearly not a pampered and sheltered purebred, either in looks or personality. I would guess at this great remove of years that he probably had a bit of long-haired German Shepherd in his multifarious lineage. He was really a very beautiful dog, a bit smaller than a typical shepherd and slightly more compact, less lanky. But just the right size for hugging, and covered with a long, thick, gorgeous tar-black coat.

Tar was easy to anthropomorphize. He seemed to have just as much the mischievous and play-hungry attitudes as all of the neighborhood kids had, and an egalitarian willingness to embark on any expedition with any of us, whether with him in the lead or being allowed to trail alongside. He couldn’t resist hunting, and was mostly welcome to do so around there, where at the time the street was only half built-up, still checkered with weedy, tall-grassy empty lots, and dead-ended by a beautiful little woodland of Douglas firs and salal and ferns. Tar didn’t know the difference, of course, between a mole and a small kitten, but he could hardly be faulted for that; so as long as the folk around kept the kitties indoors, we were at the same time kept mercifully molehill-free. Being as inquisitive as any dog, Tar did have a few run-ins, not least of all with the toad he caught that left him running around foaming like a punctured beer can for a short while.

His worst run-in, though, could be said to be with his otherwise kind owners and the annual summer haircut to which they subjected him (known to us as the “lawnmower” haircut) that left him looking like a black sheep clipped by a woefully inebriated shearer. We felt deeply sorry for him; he was painfully aware of being stripped of his accustomed handsomeness and would immediately set to work to deliberately do some forbidden thing right in front of anyone so that they would scold and banish him and he could go hide and nurse his shame in private for a little while. After a short period of growing out the offending haircut, however, he would return to his sanguine equanimity and rejoin the forces of the street’s youthful denizens at play.

Tar was an able guard dog when we were fort-building in the woods, keeping unwanted squirrels and crows at bay. He was a great exercise coach, leading us on loping, leaping bounces through the waist-high grasses in the vacant lots–and also our watcher lest any of us come unexpectedly upon one of those Timmy’s-in-the-well-sized holes dug in them to test water table levels before a build. Pity any of the kids that came along too late in the neighborhood development process to watch Tar pronking his way across a vacant lot with exuberant abandon. He was truly the very picture of living fully in the moment.

I still enjoy the company of a well-behaved and friendly dog so much that if my life weren’t so overfilled with other enjoyable company and activity I would undoubtedly succumb to canine charm and adopt such a companion after all. I am grateful to have a number of friends with sufficiently delightful beastly members of the household–dog, cat and otherwise–to keep me from mourning the vacuum (or more likely, the need to vacuum much more frequently) occasioned by lack of a dog or cat or small wildebeest keeping us company in our house. After all, it’s through others that I’ve always had the pleasure of meeting and being befriended by great animal companions.

Makes me wag my tail with happiness. 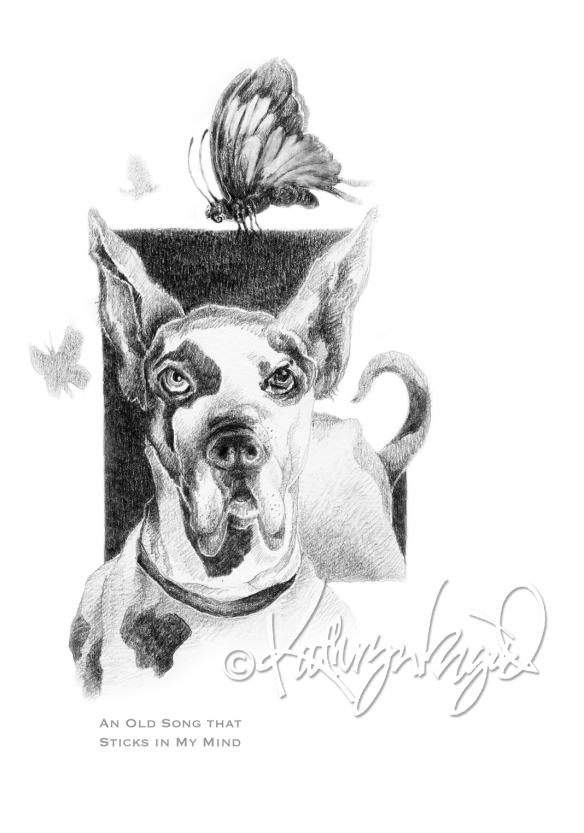 One should have as many Best Friends as possible in life . . .

4 thoughts on “Raised by Dogs”