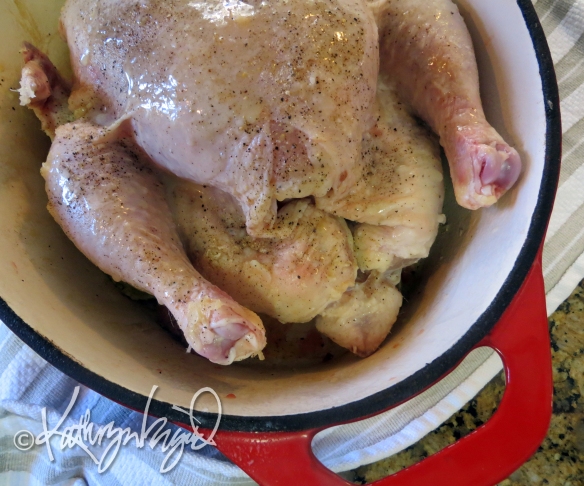 No fingers must be licked for chicken to be considered notably delectable. Still, being no stickler for any particular sort of manners, I am not averse to slurping at any remnants of good food stuck to my fingers no matter what they are or, possibly, where I am. And I find that some of the appeal of eating chicken is that it lends itself to an enormous range of edible iterations that are a pleasure in the making, in the dining, and in the finger-licking aftermath of it all. Chicken plays such a lovely supporting role to any number of costars among the pantheon of possible flavorings and ingredients that it’s never difficult to imagine yet another wondrous way to enjoy a chicken dish. Add to that the potential for re-imagining the chicken in numerous follow-up dishes if there should happen to be any left over from dinner, and you’ve got one fine, fine companion in the kitchen. 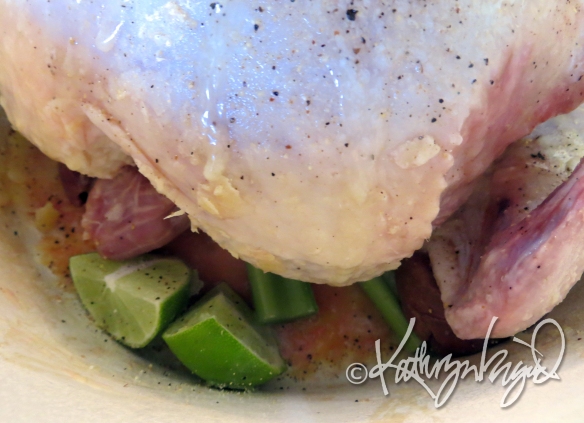 Our friendly chicken on this occasion, a handsomely fat-breasted creature of purportedly wholly organic origins (and who am I to argue), was gently consigned, in a Dutch oven larded with a generous quantity of sweet pastured butter, and wearing a good dusting of homemade lemon salt and pepper, to lie on a bed of neck and giblets, celery chunks and quartered limes that suspended it above the cupful or so of white wine pooled underneath. The oven, set at about as low a temperature as it could sustain below the mere warming of its interior light could generate, brought the chicken up to moist-cooked interior temperature over a long, slow afternoon before being brought out from under its protective lid for browning under the broiler at the last moment. Not the fast food version of ‘finger-lickin’ good’ but rather a lengthily slow-cooked bit of tenderness that deserves hand-cleaning after the fact all the same.

The simple sequel to this supper can come from any number of inspirations. On the latest occasion it was pairing the chicken with some crisp-tender hash browns, along with warming some leftover marinara sauce, butter-cooked mushrooms and herbs together to create a facsimile of Chicken Parmigiana. Rather than create the breaded cutlets in the traditional style, I simply layered the slices of moist chicken next to the potatoes, spooned on some mushroom marinara, sprinkled on some shredded Parmigiano, and melted the cheese just a little to round out its flavor. Far from the heights of authentic Italian culinary art, but let me tell you, it wasn’t hard to eat all the same. Might be having some again soon, since there’s still more of that nice chicken that I cut up and popped in the freezer after roasting it the other day. Of course, I could veer off toward some Tikka Masala . . . or chicken noodle soup . . . or quesadillas con pollo.

7 thoughts on “Foodie Tuesday: Clean Hands and a Cooked Chicken”