Clouds have long inspired a lot of fantasy, and though I’ve enjoyed many a day of lying around imagining what I saw in the clouds–creatures and inventions of all sorts–I’m quite certain I’m far from alone in entertaining myself with this pastime. A frequent identification of clouds by a great many of us aficionados, too, is the spotting of sheep among them. Whitish, puffy and fluffy, sometimes seen in herd-like groups and sometimes seeming to wander aimlessly, clouds and sheep both inspire a bit of dreamy invention in me.

Contemplating the possible relationships between them is just as delightful to me as noticing their simple visual resemblance. My current dream is that once-upon-a-time, there was a gentle old wizard meditating in a meadow, and he found that despite his lovely surroundings and his peaceable and contemplative nature he couldn’t quite get to the point of having the restful nap he so desired. Couldn’t, that is, until he conjured some of the nearby sheep to float around him like sweet woolly zeppelins, whereupon he closed his eyes in quiet ecstasy and drifted off himself into ethereal sleep. 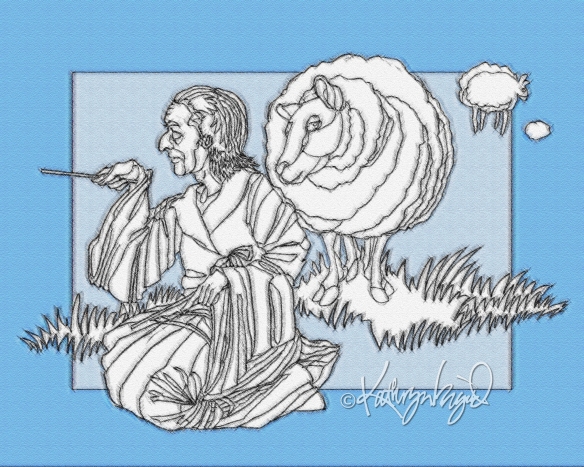 Silly, I know (and potentially having some logistical issues attached), but I find the image somewhat comfy myself. Since it’s nearing 3 a.m. as I write this, I do believe it’s a fine time to test whether simply savoring the image might not get me appropriately sleepy. I’ll get back to you on that. Eventually. Though I might be just a little woolly-headed on my return.

I know not what the relevance

Of tortoises and elephants

And goats in my dreams constitutes—

I only know that when I sleep,

This is the zoo I tend to keep,

And if it lends to such pursuits,

It may include a thousand sheep.

7 thoughts on “How Clouds were Invented”