I’m neutral about facial hair. Well, on males, at least (sorry, Tante Anna!). My spouse had a short goatee when we got together, and while I thought it handsome on him I not only didn’t mourn its demise when he shaved it but realized afterward that it was light-colored enough that some people were apparently not only unaware he’d removed his beard but that he’d had one in the first place. Guess he didn’t go around kissing and nuzzling just anybody.

I’m now so used to his being clean-shaven that I imagine it’d seem outright weird to readjust if he opted to grow a beard again, or a mustache. On the other hand, it is intriguing to see the major resurgence of popularity that all sorts of hair-raising acts are undergoing these days. It’s a great time, in my opinion, that it’s not only quite common to see people in the same place dressed in pants or skirts of all different lengths and heels of widely varying heights but also hairstyles ranging right from shaved heads (men’s and women’s) to dreads or super-‘fros (black, white and brown people’s). Curly or straight, short or not, natural-colored or wildly dyed, it can be anything that suits the heart or the head of the wearer. I like that. 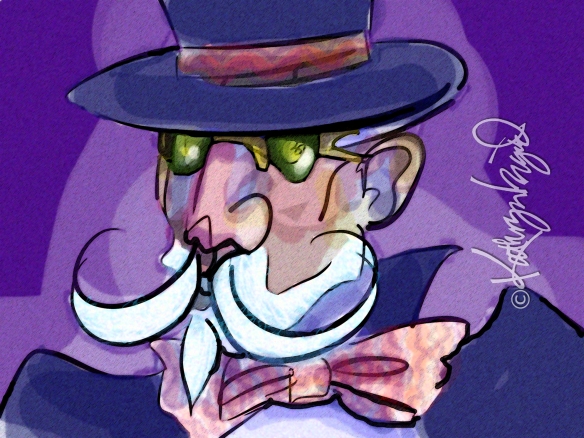 What’s probably the most entertaining aspect of all this to me is seeing so many guys of a twenty-ish vintage looking so distinctly like those photos that can be unearthed of my great-great grandfathers and their brethren. I suppose that shouldn’t be entirely shocking in an era where baby names have also trended back to that generation’s. Can the bustle (you’ll pardon the pun) be far behind? Not to worry…I probably won’t be able to see what anyone’s wearing through the thicket of beards by then, anyway.