Starting the preparation of a meal with fabulous leftovers given to me by friends after I’ve dined at their place is truly one of the most cheering and hunger-encouraging ways to go to the task. Food that was delicious in itself, made more so by having been prepared for me by good friends, and now the excess of which has been gifted for yet another meal’s foundation, becomes an almost perfect centerpiece for another delicious and happy meal.

The gift that shaped such a duo of meals recently was grilled pork tenderloin. Our friends served it hot from their patio grill along with an assortment of glorious side dishes and the grand finale of homemade pie, all of this well-seasoned with beautiful, comforting, joyful good company. Fresh garden salad, baked potatoes, vegetable crisps, and that succulent, clean-flavored pork tenderloin. I didn’t even pretend to resist when I was offered some of the remaining roast to take home at the end of the day. 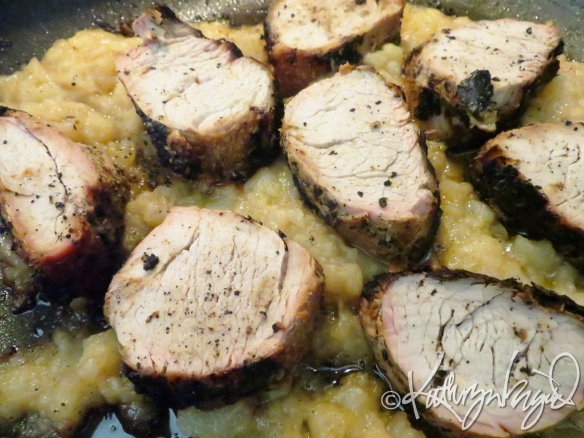 My version of the meal went in a little different direction, any attempt to copy that event exactly being doomed from the start, but I knew I wanted to keep the simple excellence of that roast’s flavor as the centerpiece. It was made for such things. I already had a variant sort of loaded-baked-potato in my refrigerator, so I used the cheese, cream, and bacon filled mashed potatoes, deepened with smoked paprika, there as the stand-ins for the day. Not having had any success with growing greens, I thought store-bought ones might seem like a little bit of a come-down after the previous dinner’s, so I skipped salad. Peas, instead; peas barely cooked in a batch of brown mushrooms that had been marinated and cooked in Tamari, dry sherry, and butter and then cooked until hot enough to warm the peas without further time on the cooktop. 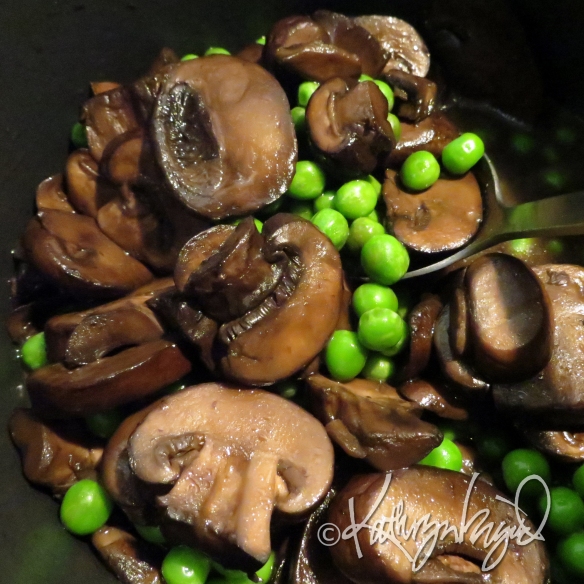 I made a compote of fresh pears with lime juice, maple syrup, and butter and seasoned them with a splash of homemade vanilla, a pinch of salt, and a healthy pinch of ground cardamom. I guess I must’ve been in mashing mode after the potatoes, so I just cooked the pears down until they, too, could be mashed, and I finished the pork the same way I’d finished the peas: got the pear sauce good and hot, laid the slices of pork loin on top of it, put the lid on the pan, and took it off the burner, letting the sauce steam the meat through to warm it once more. Dinner was delicious. Again. Now, isn’t that twice as nice? 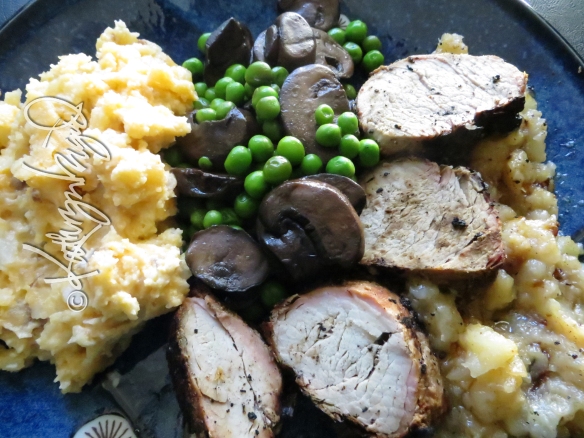