It isn’t easy being the eldest child. You tend to be expected to carry the world on your shoulders for any kids that come after you. My older sister certainly had her hands (and shoulders) full when it came to the other three of us. Following her lead was the logical thing I expected to do from Day One, and she undoubtedly knew that her every word and act would be scrutinized and grasped as tightly as any life’s-mystery-solving clue could be.

Unlike many, my elder sibling was neither empty-headed nor empty-handed when leading or hauling me through the years, however. I must assume that she was generally more conscious of what she led me toward or away from than I ever was, and whether there was a particular purpose regarding its effect on me or it was simply what she needed to do in her own life was as irrelevant as if I’d been a duckling following a duck, since after all, our parents didn’t go to school with me, play in the yard with me, or otherwise have anything like the minute-to-minute impact a sibling could have. I apologize, here and now, for whatever time and energy I stole away from my big sister that she ought to have been spending on herself alone! Strangely, she still likes me, though, so I take the liberty at the same time of assuming her forgiveness on that front. 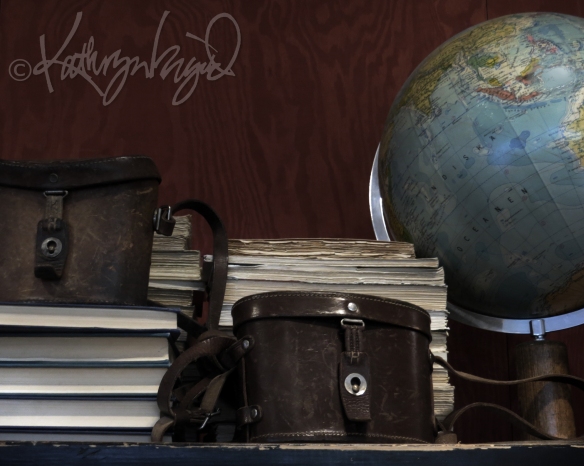 I certainly didn’t quit the hero-worshiping dependence when we were young, either. It was my sister who gave me the world. Our parents saw to it that we learned to read, and that is an enormous gift that can only be repaid in kind by handing it on to younger people as they come along, but it was and continues to be my older sister who blazes the path down every library aisle on earth (and a few in the ether, too) and inspired me to try to better my reading and writing. She always had astonishing verbal skills and a voracious appetite for all sorts of books, so she set the benchmark in reading and writing that I will always lag behind but continue to pursue.

If that cracking open of the world in the pages of books weren’t enough, there was always the lure of the tangible world as well. There, too, our parents paved the way for our ventures beyond home borders, both financially and with the encouragement to broaden our horizons beyond anything they were privileged to experience at our young ages. But again, it was at big sister’s beckoning that I took up the challenge given by Mom and Dad to take a semester off from my university studies, spending both the time and the money I’d have devoted to those on traveling Europe, instead, with my sibling. It was more education than I could possibly have crammed into the other three-and-a-half years of my undergraduate studies altogether, utterly worth all of the angst and expense it terrified my twenty-something soul to expend, and all happened under the tutelage of my sister, my intimidatingly fearless guide and hilarious friend.

There’s nothing a sister can say or do to make up for all of the times I was a pain in the neck—or anatomical regions south thereof—to my older sister. Despite her admiration for all things chocolate, no amount of truffles and cakes and French Silk Pies will do. But I am grateful, and I do thank her, and I certainly wish her a wonderful birthday today and many more of them to come. I’ll just have to watch and see what she does in times ahead, so as to get inspired for how to handle the next such conundrum as they always do come along in life. That’s what elder siblings are for, it seems.