Zombies are still surprisingly popular these days, considering their poor (or, at best, wildly over-eager) social skills. The current crop of them was, impressively, a resurrection of many previous generations’ versions of the species, which means that they are not just returned from the dead, but returned from being returned from being dead. Or something like that.

In my kitchen, I am mostly nicer than a zombie-master, intending only good things to happen via my culinary experiments. But no matter how kindly my purposes, sometimes I am an unintentional bringer-of-doom. Many are my fellows, I’m sure, but perhaps fewer are those who will admit to stumbling around the cooktop in their experimental work, lest they be accused of attempted poisoning or any such mean-spirited rubbish. Sometimes I’m even dumb enough to try to revive the dish that had already failed, which I suppose makes me guilty of the same sort of resurrectionist hubris that has brought about many a modern-day pop-cultural scene of zombie-apocalyptic grocery shopping. At least I don’t attempt to feed the second variation of my experiments to anybody else before carefully being my own lab volunteer. But I hate to be wasteful.

*”WHO’S BEEN MESSING WITH MY COOKTOP?!” roared the Giant. There was silence in the wreckage, for the Zombies had eaten the Cook—along with her only semi-successful Spätzle as a side dish, because her tiny brains alone were clearly not filling enough to assuage their ravenous collective hunger.

So when I made that recent jiaozi whose dumpling dough was less than perfect, I couldn’t resist trying to rescue the remaining dough. It was, honestly, closely based on other cooks’ supposedly successful versions of gluten-free pasta doughs, so I figured my inability to achieve a particularly shining success with the same wrapper recipe was more a matter of practice or tiny ingredient tweaks than anything more serious, and sought to revise the dough just enough to make it noodle-worthy. An added egg did, in fact, help it to have much more of the texture and malleability that I’d want in a pasta dough, although it was still just loose enough that unless I added further flour I couldn’t hope to roll it out in thin sheets. So I thought about thicker noodle variants and opted to give this dough a try as Spätzle, since those tiny schwäbische Schätze (southern German gems) aren’t rolled out before cooking. Indeed, the dough went through my grater rather handily (if extremely messily*), cooked at a good speed in my boiling broth, and floated up as light, petite, pale golden dumplings, just as I’d hoped.

They even tasted quite lovely, straight out of the steaming pot and doused liberally with browned butter and a sprinkling of grated cheese (I used Parmigiano-Reggiano for its added nuttiness). But tasting them ahead of time like this, as well-meant a prophylactic measure as it was, did mean that I would have to reheat the mess yet once more, and alas, even the most gently handled of pastas simply couldn’t survive another round of stasis-and-revivification. Sometimes the dead remain dead. The last reheating left me with buttered paste rather than pasta, and the only effect of adding the egg to the dough was, ultimately, to leave me with egg on my face. Ah, well. Of such mini-disasters are legends, or at least jokes, made. The joke’s on me.

Thankfully, the Cook had inadvertently saved the world by cooking dumplings that tasted okay at first but quickly became unpleasantly cement-like in the Zombies’ remaining innards and turned them all into stony statues of their *former* Former Selves. And so the Apocalypse was averted, and simultaneously, a glorious, artful monument in statuary made to commemorate the moment of this, the world’s rescue. You’re welcome.

Don’t get me wrong: being an old enough geezer (“lady” might be a stretch) to want to get the most out of my grocery money and cooking efforts isn’t always a bad thing. I’m ancient and experienced enough, in fact, to know that I should occasionally admit defeat and throw out the last of that failed dough. Chalk it up to been there, tried that wisdom.

Other forms of wisdom are well worth the earning in the kitchen, too. Like, when there’s a fresh batch of bone broth cooking, a really, really fabulous batch made with my usual ingredients plus both chicken feet and beef feet that did indeed come out of the slow cooker as rich, glossy, and jellied as the most beautiful classic aspic of my dreams—but there’s still a pint of the last batch in the fridge, rather than bolt or toss the latter, I simmer it down and get an equally gorgeous reduction for sauce base and soup enhancement. I added some dry sherry before cooking it down. Just for fun. Oh, and a little sweetness. This little tub of wondrous demi-glace is good enough to melt for a beautiful finishing sauce for anything savory that isn’t vegetarian, just as it is.

But another old-lady bit of kitchen witchery that more people should know and respect nowadays is that, while minimal cooking of vegetables can preserve more of their original nutrients, not to mention textures and colors, than boiling them to mush in the fashion of days long past—or as though they’d started cooking back then—softer veg is not nasty. Gentle handling is the difference. Some good Southern cooks in the US have not entirely forgotten and forsworn the low-and-slow glories of vegetables simmered for ages in bacon grease or butter, and any culture that values its stews, dutch-oven artistry, and slow cooker magic, for example, retains something of this truth.

So for a recent lunch with a couple of friends, I opted to carry on these traditions at both levels, piling up a batch of bite-sized cauliflower, carrots, and celery in my trusty small Pyrex covered dish, put a knob of browned butter and a quarter-cup of said demi-glace, still jellied, on top, and steamed the lot gradually in the microwave into lightly softened submission. For the finish, I stirred the vegetables, topped them with a piquant garnish “salad” I’d made earlier and refrigerated, a mix of preserved and chopped green olives, pimientos, black olives, and mushrooms. I added a generous sprinkle of Parmesan shreds, and let the dish heat one last bit before serving. Old-fashioned vegetable happiness. With a deep undercurrent of old-fashioned cooking from a rather old-fashioned person. 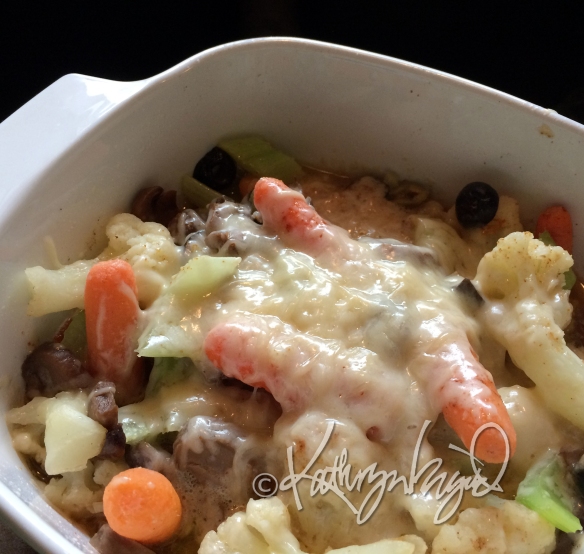