Does my post title confuse? Bemuse? Please, friends, excuse. My moment of enthusiasm is not meant to give you a contusion, it’s only about infusion. 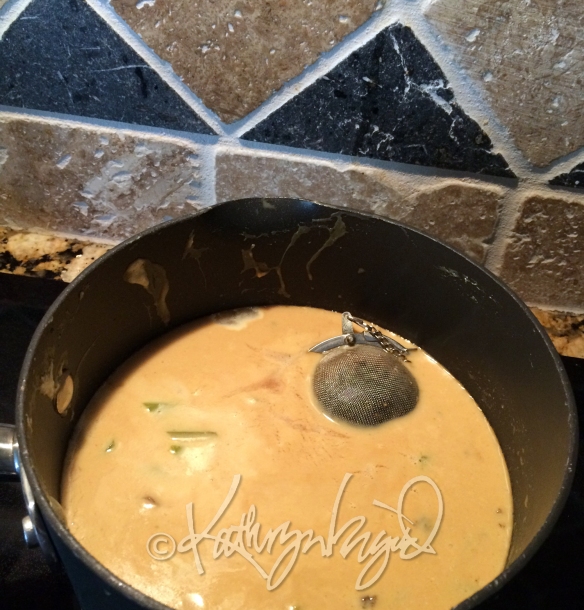 For my infusion effusion: nope, not a solo meatball, but a tea ball full of flavoring goodies.

Putting flavor into liquid without leaving the flavoring agent in it any longer than necessary (or desired) is what one does when one is longing for a spot of tea or a cuppa joe, but it is surprising how seldom we remember the option when cooking. Cooking, as I do, for a mostly anti-veggie person, I find that he objects less to things that have been cooked into a dish or sauce until they’re visibly indiscernible and mild in flavor, so sometimes it’s also nice to infuse the food with flavors but not leave the actual flavoring agent in it at all, so as not to distract my partner from his appointed dining.

Making a mild variant of Tom Kha the other day, then, I used a tea strainer for the green stuff and a few other tasty Thai ingredients, knowing that I could pull out the solids when the liquid was seasoned enough by them. A base of homemade bone broth mixed with coconut milk and a bunch of home-ground curry powder is easy enough to throw together when those are all in the fridge, freezer, and/or pantry, as is almost always the case here, curries being as favored as they are in our house. I filled the tea ball fairly full of my various secret-agent Thai flavors: lots of minced fresh ginger and varying smaller quantities of Thai basil and cilantro leaves, lemongrass, red pepper flakes, and I would usually add kaffir lime leaves too, but had run out. In addition, I poured in a little lime juice (to substitute for that last ingredient) and some Tamari. Sometimes it’s fish sauce, sometimes Tamari.

I put some chunky diced carrots and celery and mushrooms into the broth along with the tea ball and the other liquids and simmered them all until they were cooked to my liking, keeping the heat on a very low simmer for a fairly long time. At the end of the process, it’s so easy to toss in, as I did, a big handful of langoustine tails to finish cooking them. Also great as a plain vegetable dish, with tofu (though I’m supposed to limit soy, because of my thyroid meds), with prawns or cubed chicken. Lastly, though it’s hardly a strict adherence to Tom Kha traditions, I do like to either serve the soup like a sauce over rice or add bean threads or, as in this instance, rice noodles.

So easy, so flavorful, so flexible. And such a dish, in turn, infuses my senses with all kinds of pleasant memories, going back to my first tastes of southeast Asian foods, most notably the feasts prepared by my fabulous Thai roommate and girlfriends when we were all in college together. Delicious. Yes, the memories, of course—and the food, too! 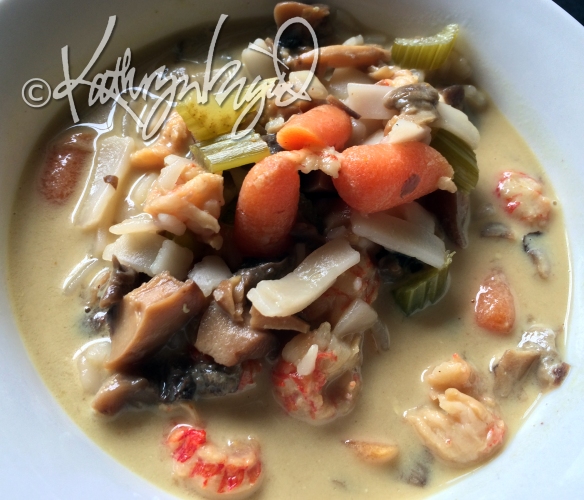 10 thoughts on “Foodie Tuesday: Do Not Refuse to Enthuse”