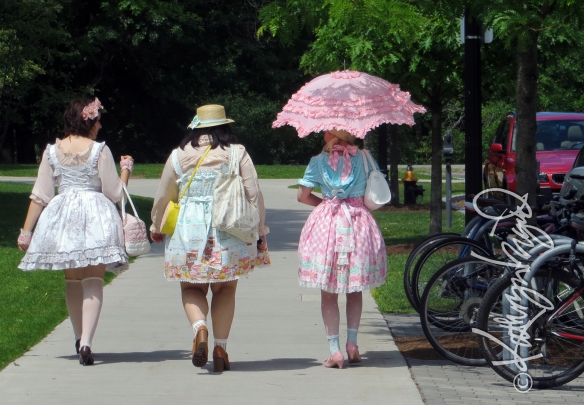 Not the most predictable of sights in Boston. Unless you happen to have a kawaii-Lolita events calendar on your desktop, maybe. But just getting out for a meander might also find you on the heels of a trio of Lolitas.

The idea of having ‘a place for everything and everything in its place’ has appeal. It has many useful applications. A life enhanced by travel needn’t be dominated by such notions, though, or I risk being too fixed, both where I have landed and in my expectations and experiences wherever else I go.

Like most people, I suppose, I find comfort in the familiar, in anticipated pleasures and good things I expect, but—especially when I travel—there’s another sort of wonder and happiness that abounds when I can let go of these supposed needs and just allow life to happen.

From my very first major sans-parents sojourn, the privileged joy of an undergraduate “sophomore sabbatical” of untrammeled European travel with my older sister, I’ve continued to discover the enrichment and the thrilling frissons of serendipity and surprise. Hearing a great performance by a renowned orchestra in a glorious concert hall is well worth saving and planning for, of course, but even its excellence is not more fulfilling and memorable than following an unexpected tune through the byways of a foreign town to find myself joining the local crowd as they cheer on a community parade, marching bands blaring and uninhibited children dancing alongside.

Making the pilgrimage to a must-see historic site with the hundreds of other tourists is often not only worthwhile but sometimes enhanced by the very circus-like atmosphere engendered by the regimented masses. But it can barely compare with, never mind eclipse, the almost clandestine delight of having the ‘inside scoop’ from a city native who directed me to a certain narrow side street to knock on a certain undistinguished door, to borrow from the house’s owner a wonderfully heavy antique iron key that unlocked a creaky gate around yet another corner and let my sister and me into a stone-walled, fog-shrouded, hidden ancient cemetery there. That side-adventure on my first big travel expedition was every bit as gorgeous, astounding, meaningful, and artful as the historic sites on the trip, yet as far as I know, it remains unknown outside of its quiet Irish neighborhood. Making reservations and having tickets for the plan-able parts of that journey were both predictably well worth the time and effort, but a couple of hours spent wandering with my sole travel companion among the storied gravestones in that magnificently green and weedy private burial ground, and then climbing the narrow stone spiral up the tower ruin in that enclosure, peering through the mists out of its mediaeval arrow-slit to catch glimpses of the dark houses outside the walls—that was a sweet afternoon no amount of planning could have bought.

Nowadays, my favorite parts of most travels remain the random and coincidental joys of going down appealing alleys on a whim, following the sensory lures of a wafting scent here, a fugitive melody over there, a flash of color or a movement more felt than seen on my periphery, that can pull me off course in a curious second, redirecting my attentions to livelier things. That’s how I’ve found myself in a cafe kitchen helping the chef pipe his handmade ricotta filling into cannoli while ostensibly just grabbing a bite of supper before a baseball game, or watching the splashy finale of an unadvertised international fireworks competition from a perfectly positioned hotel room balcony; how I ended up discussing the virtues of tuna salad sandwiches with a television actress in an airport security line, stumbling onto and being escorted off of a missile site, standing backstage and meeting Lord Whatsis before the opera, and learning from the groundskeeper at a Victorian-style public garden how he grows weeping mulberry trees from cuttings.

Like the chipmunk that found its way into the building when I was walking up the hallway toward it just the other day, by merely rambling aimlessly in an attempt to get myself oriented in unknown surroundings I sometimes discover I’m right in the middle of a fabulous new treasure-house of wonder.