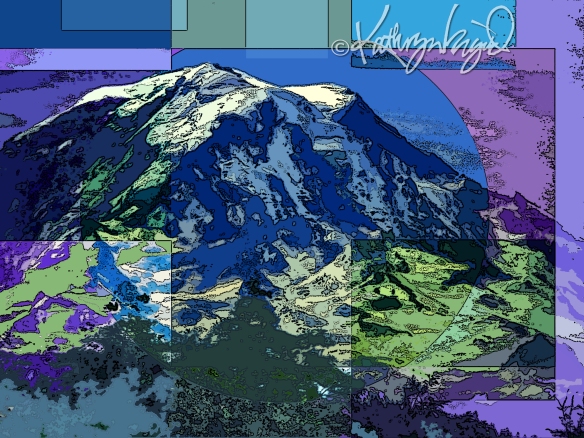 My many years spent as a lucky resident of the Pacific Northwest were dominated, as are many such fortunate souls’, by The Mountain. Mount Rainier can be coy, hiding behind not only her customary jaunty little beret of lenticular cloud but veiled further in the often hazy skies of Western Washington state. She can be mighty capricious, being after all a volcano whose natural habit is to lose her temper occasionally, diva that she is.

If you click on any of the site links above, there’s plenty of information to tell you far better than I could just how alive and powerful this entity is. So it’s not surprising that many of us refer to Mt. Rainier merely as The Mountain. Or, just as often, My Mountain. She owns us, in many ways, for when she makes an entrance, dominating the horizon with her granite glory, bedecked in a dazzling gown of white snow and fur-trimmed in, well, firs—we can’t help but be in awe. Such presence. Such beauty. Such danger, too, though we can’t think about that too closely, since we don’t know when or how; even if we did, there’s little chance we could do anything about it. But yes, deserving our respect. And in some ways, perhaps, because of this understanding along with the tremendous beauty, we feel an intense connection to the perpetual presence standing above us. So we call her Ours.

The valley where I lived for seven school years, and my parents remained resident for longer, is one of the most logical outlets for the lahar that would follow a pyroclastic flow from a Rainier eruption. That will likely wipe out much of the valley, whenever it comes. From our house above the valley, I stood out front in 1980 and watched the massive plume rise when Mount St. Helens, about seventy miles directly south of us, blew her lid, and that mountain also sits on the same Ring of Fire as the whole seismically busy left coast of the United States. Tiny amounts of volcanic ash drifted onto our neighborhood occasionally for a brief period thereafter, the same ash that was both ethereal looking grey ‘snow’ in a wide swath around the mountain and in traces across the continent, fully nine hundred miles across. St. Helens started at something slightly under ten thousand feet (3000m) high before the blast; her taller sister Rainier is a bit above fourteen. Mt. Rainier could have a smaller eruption…or be more powerfully, radically, explosive yet. Meanwhile, stunningly gorgeous. But isn’t that just our life all over? Precarious, yet all the more exquisitely precious because of that very tenuous quality. The Mountain owns us, and we in turn look on her as Ours.

This summer’s short visit to family and roots, naturally, gave us both the urge to visit Our Mountain, too, and Mom and Dad S—also longtime admirers of the magnificent mountain—joined us for that wonderful earthly element of our roots tour. Rainier smiled benevolently as we approached, doing that magic trick of hers where, as foreground terrain changes, that peak looks like you could just reach out of your car and stick your hand in the snow; you go around the corner a mere tenth of a mile ahead, and the mountain looks incredibly remote, hours away; just over the next rise, everything has shifted once more and you realize that you’ll be entering the national park at the foot of Rainier in a few minutes, the trees rising up like a cathedral colonnade through which we process onward for our audience, our reconnection.

No matter how long I live, The Mountain will outlast me; whether that next, inevitable, eruption comes during my tenure on this planet, whether it’s when I’m near enough to be killed or directly affected, or that this particular cataclysm finds me distant and leaves me unmarked, there will still be traces of Mt. Rainier for eons after I’m forgotten dust. I just found out, to my surprise, that it’s possible to get permits to scatter funerary ashes in Mt. Rainier National Park, and that seems like a delightfully apropos gift to give to an entity whose own ash will most likely someday blanket much of the Northwest. But I hope that my turn at that, should my survivors choose that option, is in the distant future. For the present, I happily remain an admiring acolyte of the splendid wonders of my mountain. Our Mountain.

12 thoughts on “Our Mountain”