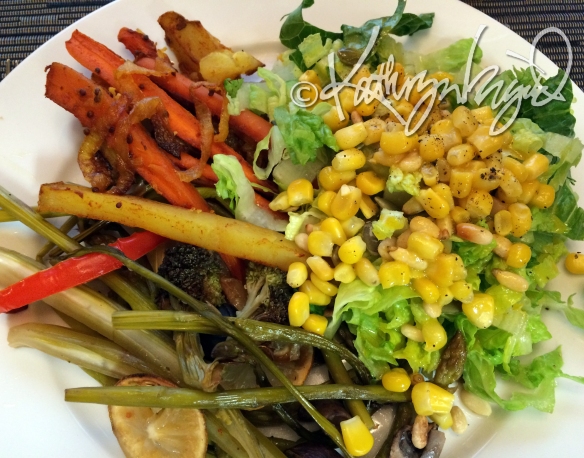 I’m experimenting with various vegetable combinations lately, for whatever reason, and finding more and more of them that please me than ever before. That said, no recipe or variation thereon is guaranteed to be ideal, either in its as-written form or to my personal taste. To wit: a split pea soup recipe I tried out recently.

Unlike my normal practice, I followed the recipe pretty much to the letter, the only change being to substitute russet for fingerling potatoes in lieu of an extra, last-minute run to the grocery store. This alone undoubtedly did skew the recipe, because of course russets or baking potatoes are mealy and liquid-stealing by nature, and I knew that the resulting blend would require a little more of its liquid to arrive intact…so I adjusted that amount very slightly and accounted for the concomitant change in seasoning with a pinch or two extra as needed.

Now, I grew up with split peas as a thick porridge or stew rather than a watery soup, so I had no worry about the stuff turning out thick, which it did. But this was no stick-to-my-ribs hearty porridge, only grainy and mealy slushiness. Worse, it was, as my superhero supertaster of a spouse agreed, the superlative of blandness. Even he couldn’t detect enough flavor in this mixture to warrant eating a whole pot of it, fresh or reheated.

I will not, however, be defeated by a bunch of boring and dull-textured vegetables. Still, I had other meals to make in the meantime, so the remainder of that dinner went into the fridge to sit in the naughty corner and think about its misdeeds in the dark for a day or two. I had roasted vegetables to make.

This is something I crave in the cooler months, or what passes for such things in Texas. It’s one of my favorite ways to boost the flavor and character of not only the individual veg themselves when straight out of the oven but also the dishes to which I can add some or all of them later as slightly caramelized booster versions of themselves. This time I prepped a two-pan batch for the oven. One was a mix of thickly julienned potatoes and carrots and onion with a touch of garlic plus a paste made by blending turmeric, smoked paprika, a little smoked salt, and yellow mustard (the vinegary American kind) with a spoonful of my homemade veg broth (also turmeric-and-paprika tinged in this batch). I stirred those all together with a few brown mustard seeds, and stuck them in a big baking dish.

Joining this pan in the oven was another, filled with asparagus spears, julienned celery and red capsicum, quartered brown mushrooms, a small handful of broccoli flowerets, and pitted black olives. This got a good spoonful of veg broth in the bottom to keep the onions and garlic from over-roasting. Then, I dressed over the whole admixture with a sprinkling of dill, a slick of light-style Italian vinaigrette, and a sliced whole lemon.

Having these two ready at dinnertime, all I wanted to round out the meal was a light, crisp salad of romaine leaves and sweet kernel corn, lightly toasted pepitas (pumpkin seeds) and piñons (pine nuts), a grind of black pepper, and my orange-orange-orange salad dressing (a puree of blood orange olive oil, blood orange vinegar, and canned mandarins in their super-sweet no-sugar-added fruit juice).

The asparagus mix went well together, but as roasted vegetables sometimes do, lost its good looks in the ‘old age’ of just-past-dinnertime, so I chopped it all up (except for the limp lemon rinds), poured some more veg broth in with it, and sealed it up overnight in the fridge to meld together. This, in turn, brings me back to redesigning or rehabilitating a dish from past days in a way that pleases better than mere reheating. For today’s lunch, I took out that batch of Asparagus and Friends, pureed it all together with a little extra water to make it less fork-meal and more spoonable, and it made a fine asparagus-mushroom soup, whose lemony intensity I balanced with a garnish of the aforementioned sweet corn and a flourish of cracked black pepper.

Meanwhile, back at the Land of the Lonesome Pease-porridge…. I pureed the pea-soup boringness into a nice, smooth actual soup with the help of a little coconut milk plus a goodly seasoning with my latest batch of home-ground curry masala, and by George, that was a major improvement! With a spoonful of plain whole-milk yogurt and a shaving of fresh nutmeg over the top, it was even my favorite of the two, today. (Pardon my steam for that blurry shot.) We shall see what tomorrow brings, whether a new favorite between them, or only more leftovers on which to experiment. Either will suit me fine.

Update: I did make a change to the asparagus soup that puts it in direct competition for first place with the split pea curry. I added some whole coconut milk to it. The added creaminess and the mellowing of the flavors was a good balancing element for the intensity of the other flavors. And then I topped the bowl with a dose of additional sliced mushrooms that had been slow-browned in vegetable broth, sautéed without fat but a hearty dash of coconut aminos and regularly-added splashes of the veg broth at intervals to deglaze the pan and keep the mushrooms from sticking. And behold, it was very good!