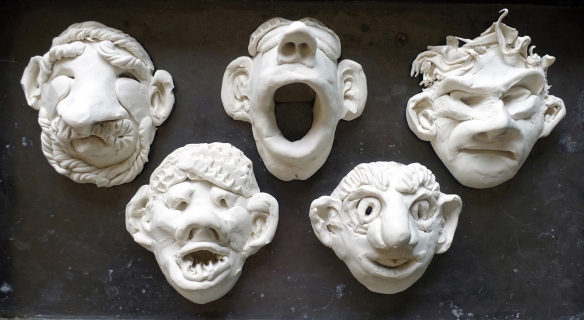 A few of my silly polymer clay caricatures for the upcoming art show/party—some of whom probably should and some of whom should NOT, sing!

I was negligent. Richard has some lovely concert stuff still ahead before finishing his academic years at UNT, and if you have the slightest chance, you should come on over to the university (or show up at the Boston Early Music Festival!) for the performances, or at least tune in to the live streaming. In his words:

“I should also say that the evening before the show (Friday night [March 22, 2019]) my Collegium Singers perform the great Buxtehude masterwork, Jesu Membra Nostri. A fantastic piece . . . and if you’re not from Denton, you can still watch online, since it’ll be live-streamed: https://recording.music.unt.edu/live so you can watch a high-def broadcast on your own computer.”

Since I last published regularly here, in fact, there have been a number of other swell performances of his with his (and others’) University of North Texas students and colleagues posted on YouTube. Look these up when you have a chance. Just search UNT + Richard Sparks there and most of it should pop right up for you. Their Vivaldi Gloria performance has apparently surpassed 2 million views by now! My own top picks are probably still the Monteverdi Vespers (enriched with the requisite and marvelous period instrumentation, a superb UNT resource few music programs anywhere can match), the exquisite Victoria Requiem, and the magnificent St. John Passion.

Happy listening. I’ll be back with further news…sooner than two years from now. I kid you not.