Who needs call centers in India, I ask you. India calls me all the time, without any help from batteries of trained phone service representatives, using only its myriad delicious foods. Works all the time! 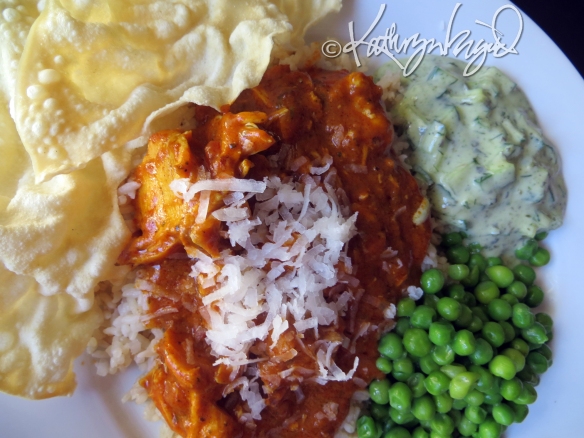 For a recent sit-down, for example, I was lured by the siren song of Tikka Masala. Too short a lead time for cooking on the occasion meant I’d need to doctor up some ready-made sauce, and there are certainly plenty on the supermarket shelves, so I picked out a jar and took it home to sauce some leftover roasted chicken and serve over leftover chicken broth rice. On tasting, the sauce proved to be a bit insipid and not quite what I had in mind, but it served as a fair base for a good dish with just a few little additions.  A bit of tweaking with cloves, cardamom and cayenne got it going slightly more brightly. A toss of coconut is seldom amiss, so yeah, I threw that on top.

Buttery peas, freshly cooked pappadums and a spoonful of raita rounded out the meal. I was delighted to discover that ready-to-fry pappadums from the grocery could be easily prepared in the microwave, of all things, which made my dinner’s trip over from India just that much shorter, a good thing indeed. Raita is such a grand condiment, jazzing up many a different dish or meal with its cool and refreshing blend of plain yogurt with a few flavor enhancers like, in this instance, finely diced cucumber, dill, fresh mint and a touch of salt and pepper. 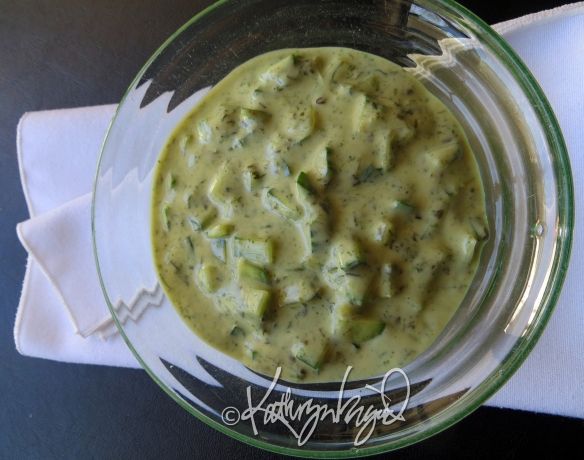 The leftovers, since the raita was eaten and gone after the first day of this batch of Tikka Masala and there wasn’t a lot of chicken left in it either, got further doctoring. I added some plain yogurt directly to the dish, and a good sprinkling of my favorite homemade curry powder along with some brown mustard and black sesame seeds. I didn’t want to fix or add more chicken at the moment but wanted to expand the dish enough to fill me up, so I thought I’d love some palak paneer alongside. I love that spinach puree with farmer’s cheese in it, but, erm, it’s hard to make when there’s no spinach around. And no actual paneer, either, it turns out. So I took the similarly slow-melting cheese I did have on hand and cubed it directly into the sauce along with the chicken and peas. I’m pretty sure that this iteration of mine departed so far from true Tikka Masala dishes that it would be virtually unrecognized by any real Indian cook (no matter how far the true Indian versions vary, from what I’ve heard), so I guess India can’t be blamed for what I have perpetrated. But then again, the inspiration, the motivation–that’s all India’s fault.

And I, at least, thank her.