When bad signage happens. And oh, boy, does it. 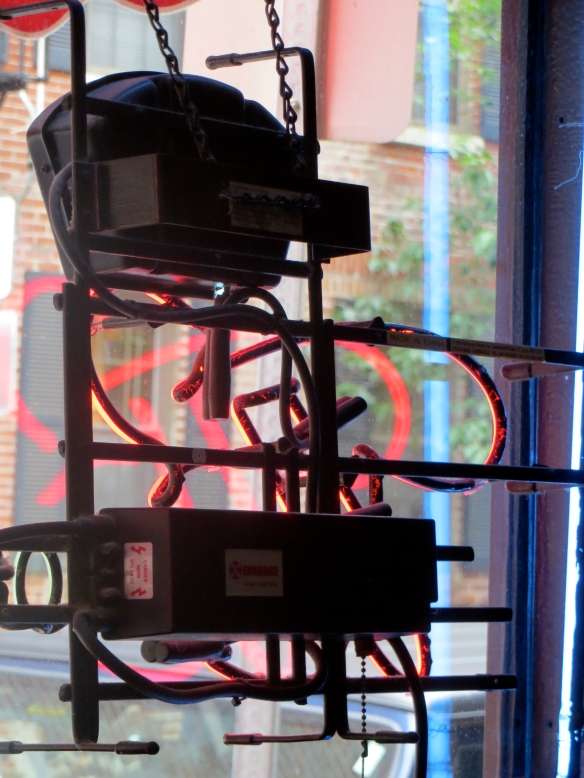 It looks okay from here, but if it’s installed in a corner that cannot be seen from across the sidewalk when approached from the correct direction on a one-way road, it loses something in the translation.

Sometimes it’s the glaringly obvious kind of crumminess that comes from ugly design, inaccurate information, typos, misstatements and inappropriate imagery that destroy the intended impact of signage. Sometimes it’s subtler stuff, though. To install signage in the wrong place–or not in the right place–or backward or upside down or in a hidden spot is not only unproductive, it’s counterproductive. It sends people the wrong direction down one-way streets, makes them turn machines on when they’re supposed to be turned off, and lets them walk past the place they seek six times before realizing that what looks like a reflection in the window is actually the back of the sign.

Sometimes, not maintaining the signs properly leads to, erm, lead poisoning, if the sign cautioning that toxic lead is present is no longer readable until one is actually in the toxic zone. A neon sign in my longtime home of Tacoma was half unlit for months on end, supposedly inviting visitors to come to a cheery little mini-mall near the freeway, but I often wondered how many people who didn’t already know the place were actually enticed by the come-hither sign winking at them, ‘COMA PLACE’. There was a family near another home of mine who liked to let everybody know which was their house, so they put up their name by the mailbox in a beautifully scripted plaque proclaiming their home the location of ‘The Balls of Bothell‘. I’m a little surprised that the city didn’t cite them for indecent exposure.

My guess is, the paint that was added over the old pump [and sign] is lead paint, too.

Funny how much we read into these things. I realize that my eyes aren’t what they used to be, but I hope that anyone wishing to tell me anything in print, whether as sign or label or translated instruction book, would take into consideration that bad signage can make bad things happen to good people. If nothing else, you’ll save one life when I don’t have a pulmonary infarct from laughing too hard at those grocery labels you put in the display uncorrected to sell me ‘Semen Tea’ and ‘Mini Bums’.

4 thoughts on “If You can Read This, You’re Already Contaminated”