I do appreciate stuff that is not only easy to fix but lives on past the fixing. By that I mean the sort of kitchen trick that provides more than one episode of eating and/or drinking, and the more the merrier. It might be something that, while it can be somewhat time-consuming while in the process (I’m looking at you, lasagna!) can be portioned and frozen for multiple meals, so the subsequent preparations are ever so much easier and faster than the initial one.

Or it might be more like what I did the other day. It doesn’t take terribly long, and requires virtually no brilliance or skill on my part to do it, but when I expend the effort to chop and then puree a goodly quantity of fresh ginger root and preserve it in vodka, it keeps for ages in the refrigerator and the mash is instantly accessible for any of my myriad edible loves. If I manage to drain the puree slightly when using it I might even score a small quantity of high-octane ginger-infused vodka at the end to enhance a sauce or a party drink that will more deservedly gain the title of Punch.

On this particular occasion, it provided me with the reasonable excuse to do a quick side-by-side taste testing of two Texas vodkas, as I knew I had none either for drink mixing or for the ginger preservation, let alone for the second set of ‘preserves’ I intended to make that day. So I bought the two bottles, one of Tito’s (a brand I’ve mentioned here before as I had discovered it is quite smooth, mellow and even drinkable straight, which is saying some for vodka in my book) and one of Western Son (a brand I’d not tried, but since it’s produced less than half an hour from where I live I thought I ought to give it a fair shake). I found Tito’s still more to my taste and less hard-edged, but both were perfectly pleasant. It’s always interesting and informative to read others’ reviews of these or any other alcoholic drinks (see the links through their names above for just a quick example) to be reminded that everything has its fans and haters, and often the most extremely opposite opinions can be backed by the exact same characteristics.

My purpose in this was pretty uncomplicated, though: I only wanted to decide which I’d rather keep some of for making the occasional spiked drink and which I would put to use as the preservative in my day’s longterm mise en place prep. Tito’s stayed in the freezer for drinks; WS got voted into eau-de-vie duty. That title is apropos not only because it will lengthen the life of the two flavorings I was treating, but also because it may become a bit of ginger firewater if the use of the root leaves enough liquid behind, and it will certainly become some beautifully flavored stuff after a good long mingling with the other flavoring agent I paired it with this time.

That, my friends, is vanilla. Store-bought vanilla beans at the grocery are often tragically bad facsimiles of their former selves, being shriveled and dry and bland and pathetic from poor packaging and over-long sitting on grimly over-lit shelves. Real, well prepared vanilla bean pods, on the other hand, are as sleek and fat and glamorous and moist as the sweet orchids that bear such beautiful fruit. Buying in bulk, with the quick turnaround of today’s online ordering and shipping, can be a much more productive and cost-effective way to bring that beauty home. So I bought a handful of nice, heavy vanilla beans and, like Jack in the fairy tale, got instant bounty from them. All I had to do was to take the WS vodka bottle that had had some liquor removed for the blending of that ginger root (now safely tucked up in a clean jam jar in the refrigerator) and the bottle had, conveniently, just the right amount of space for me to spear all of the beans down its neck into the vodka for immersion. Now all that’s left is to wait while the vanilla steeps into its full glory. 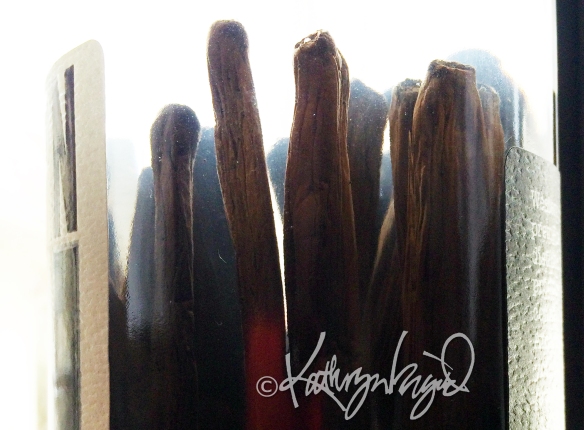 I can, in the meantime, take out a bean or two to cut and scrape and otherwise use to infuse and flavor any number of kitchen wonders. I can, very shortly, use the booze as a perfectly unadulterated vanilla extract, knowing that a little proper cooking or baking will remove the alcohol and leave the voluptuous flavor in its wake. And last of all, I can look forward to using the heavily perfumed vodka to jazz up drinks of the adult variety if I should so desire.

All of this from a short stint at the chopping board with nothing more than a knife for peeling and chopping the ginger, a couple of little saucers for testing the vodkas’ smell and taste characteristics side by side, and a bag of magic beans. And so much good should come of it in the days and weeks ahead. 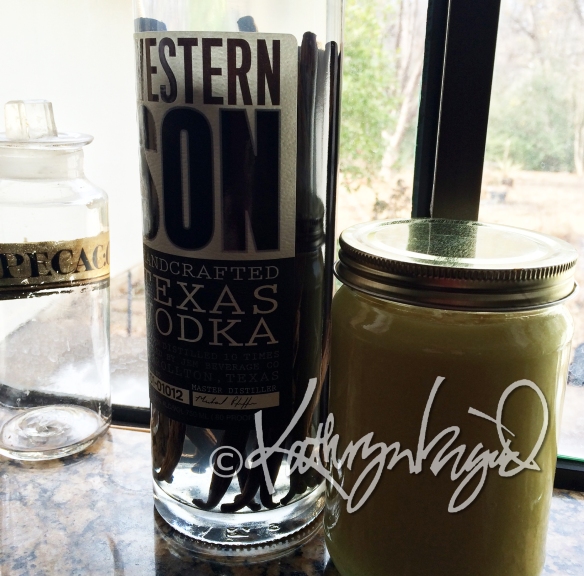