When I worked for my uncle’s construction company, the lead painter and I would look at something shabbily built and laugh that we’d been sent in to fix what the carpenters evidently couldn’t, with a mythical substance and/or application process we sometimes referred to as “half-inch caulking.” While a good job of caulking the edges and cracks around trim and other carpentry is an important step in preparing a built object or room for its paint, any gap as large as a half-inch would in reality need more serious care than mere caulking—perhaps even rebuilding—before it was worthy of being painted, and there’s no such thing as caulking truly made for such massive applications. Curing, caulk would soon enough shrink and pull away from the trim and leave a gap nearly as visible as the one it was intended to fill, and no amount of daintily applied paint would make it as pretty as if it had been assembled and prepared properly. Still, on our best days, we amused ourselves with the notion that whatever the previous workers had failed to build or fix nicely, we painters with our magic powers could doll up sufficiently to save.

I think that I am even less fooled, nowadays, by the idea that a vigorous application of fine chocolate to my innards by means of cheerful ingestion can cure anything that might ail me. But I am no less pleased to entertain that myth than the aforementioned one, and don’t mind that any proof in the positive results of chocolate-eating on my attitude is likely a placebo effect, psychosomatic or flat-out delusion. Whatever the truth, I continue to fill in the gaps of my frayed moods with chocolate, and it nearly always helps to smooth over the flaws better than nearly any other restorative out there.

Casa Cortés ChocoBar, our fantastical find of an eatery in San Juan, not only offered a plethora of chocolate treats for the repair and maintenance of body and soul but had a wonderful wall tiled with antique chocolate molds that may well have been used to cover a multitude of sins in the building construction itself. That makes the place, in my estimation, extra potent and all the more inspiring. I may be on the hunt now for chocolate molds with which to tile my next kitchen wall, but I won’t want decommissioned molds, preferring to fuel myself with the contents as I install. It seems the respectful thing to do. 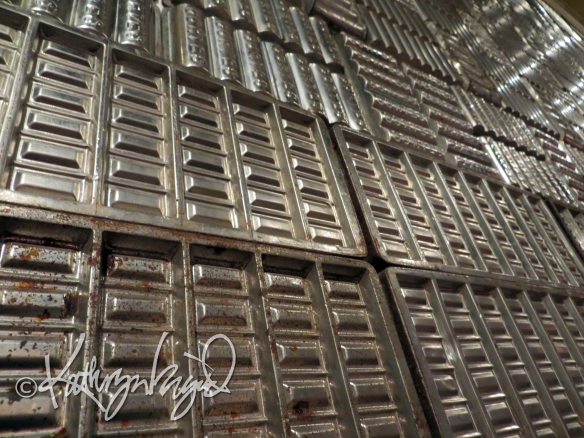 9 thoughts on “Chocolate is Half-inch Caulking for Cracked Moods”