Welcome to another episode of “All Words, No Meaning.”

I just get these strange, tickly tics at times, you know.

And I was just thinking about my wonderful brother-in-law’s wonderful mother, who once upon a time delighted us by asking in her musically lilting Norwegian-tinged English to explain the weird word one of us had used: “What is ‘wiggle’?” It made us all laugh, not least of all dear Mor. The word itself is funny. The ingenuous way she asked it was so irresistibly adorable that it made the word all the more funny, and we fell all over ourselves snickering and writhing with laughter. “Vot iss viggle?” V words are often special anyhow, I think. They are vivid. Vital. Vigorous.

Voluminous in velveteen and vivid in velour,

That Venus eating Vindaloo, in the vernacular,

Was very villainous, it’s said, vermillion in her faults,

But veiled in verisimilitude, her vices hid in vaults,

And vigorously vinegary vapors in her veins,

Yet always, these vituperative and vast, voracious ills

So virtuous seemed all in view from vane to vestibule,

From valance to verandah, I’d avow that, as a rule,

Veracity had lost its vim, a victim to her vibe

Of viscous, vain verbosity in every diatribe,

And via Violet’s vertiginous, vindictive lies,

Her vow of victory o’er all, valid and otherwise,

Would void the verve of every nerve, veritable or vexed,

And vanquish, make it valueless, in this vale and the next.

Her viands—vermicelli and Vidalias and veal

And vegetables with Vegemite were her most voguish meal—

At last revealed her venomously covert, vile inside,

When Vi’s vast vessel of vermouth rendered her vitrified,

Those virulent and vengeful, vulgar bits, for all to see.

Vast vanity and venom may vouchsafe the dark crevasse,

But even vampires are revealed, converted into glass. 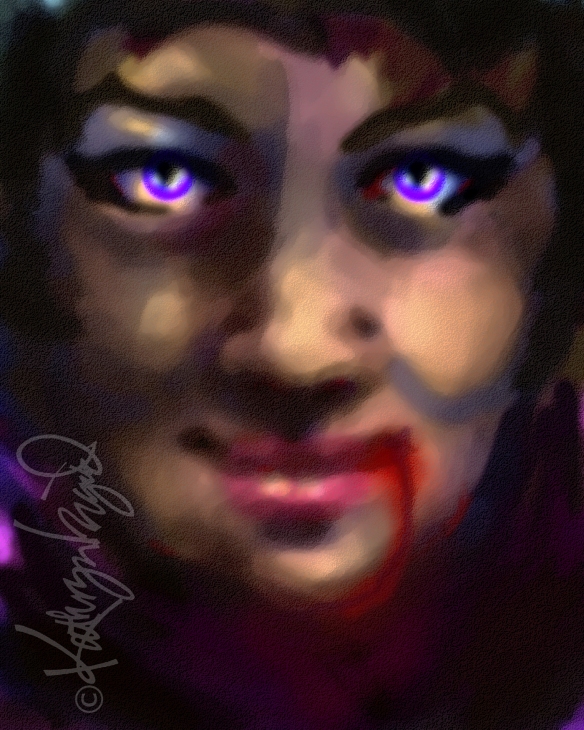