Living things, like certain mathematical systems, are attracted (or not) to each other in a wonderful variety of ways. It’s pretty hard to predict what will constitute an individual’s attractors. Some people might say that a warthog, for example, could only be attractive to another warthog, but that’s a very limited notion, because we all have different definitions of beauty and those definitions can be strictly visual but can easily also include appeals to our other senses, not only the standard receptors of touch, sound, taste or scent but also our sense of curiosity or contentment or spirituality or a whole range of other concepts.

If I were a little tiny Texas Spiny Lizard, for example, I might be interested in mating or procreating only with a similar little tiny lizard, but I could also very easily be attracted for other purposes to the warmth of a sunny concrete slab, the smorgasbord of yummy insects that visit a group of potted plants, or the shady shelter between the bricks on which the pots are perched, where I can hide from the patrolling cats of the neighborhood. If I were one of the cats, I can imagine I’d be very attracted to the lizard, not just out of feline curiosity but because cats apparently like Texas Spiny Lizards, I suppose because they are small, moving targets for the hunt and possibly just because a cat might enjoy a good set of lizard drumsticks or baby back ribs or tenderloin on occasion. Do cats analyze their dining on a basis of whether or not a meal ‘tastes like chicken‘? I don’t know, but I do know that small, moving objects and food are both common cat attractors.

I’m sure it’s also safe to assume that others are attracted to these little reptiles. Most likely that’s the main reason I’ve rarely seen one on our patio or porch any larger than this three-inch/10 cm specimen. If one of the local hawks swoops close enough to notice them, such dainty critters would logically look like the animal equivalent of fast food, and some of the smaller but reasonably aggressive birds (I’m looking at you, bluejays) might compete for such a snack. Snakes, if any of those nearby are larger than my typical garden snake visitor, would find them delectable. So it goes. We are attracted to partners and friends, but also to that which will sustain our progress toward finer dining or just plain survival. 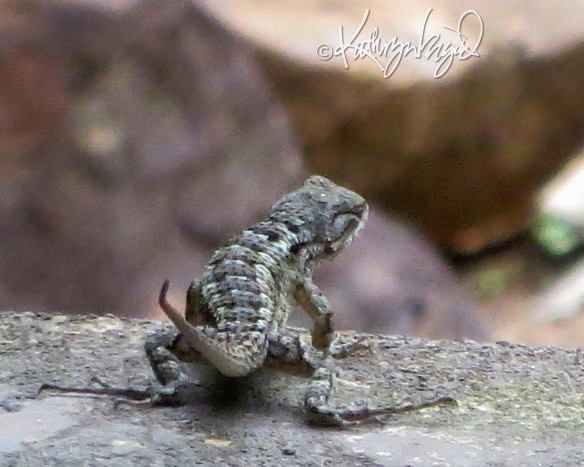 My admiration of Texas Spiny Lizards, tiny or not, is based on several of these elements. There’s the simple appeal of the handsome patterning on and sculptural shapes of their infinitesimal-alligator bodies, of course. Those zippy dashes they make from one spot to another first catch my eye and then intrigue me, especially when one of them stops to practice his pushups for a while. I like the way they hold very, very still in between moves, moving only their eyes as they seem to scan for bugs to eat or new heights of patio slab or plant pot-dom to conquer. And very often, I like to contemplate them at equal leisure, attracted most of all to their very differentness from me.