It’s not just a trademark Monty Python phrase; sometimes in cookery it’s worthwhile and enjoyable to veer off and say it’s time for Something Completely Different. I’m not talking about molecular gastronomy, because I have neither the knowledge nor the patience to imagine and execute anything quite so transformative, but it can certainly be useful and even tasty to rethink the what-I’ve-always-done approach from time to time. 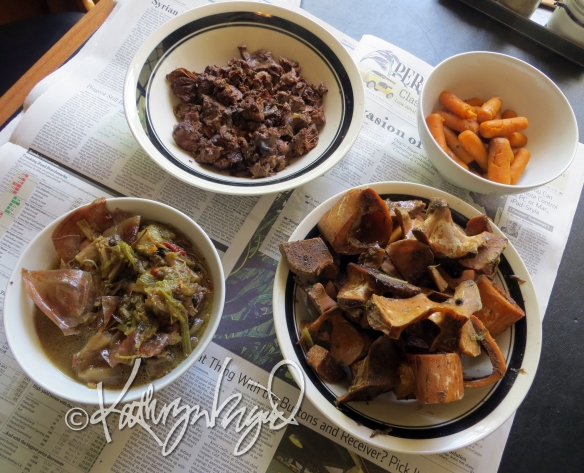 Making broth as often as I do, I’m regularly faced with the aftermath of it in the form of tiny meat scraps, softened bones and mush-cooked vegetables and think it a pity to waste anything that might be salvageable. So a little while ago I got intrigued by seeing what I might do better with this stuff than merely throwing it out.

First thought was that bones are bulky yet biodegradable objects that, in a landfill, will take up a hunk of space there a lot longer than, say, those of a decaying creature left to the elements would do. And that, coincidentally, a soil amendment and critter-control element often required for good gardens is bone meal. So I dried out the bones thoroughly and set them out in a safely remote corner of the yard where the compost heap lives. Waste not, and all that.

More to the culinary point, I thought it silly to toss out all of the vegetable leftovers of the process when, though they will certainly have given up some of their nutrients to the broth, will probably also have gained some back from their fellow ingredients along the way, so they oughtn’t to have lost all of their nutritional worth in the cooking. The carrots are the only members of the party that haven’t mostly melted to nothingness in my usual broth process and can be individually retrieved, so I picked them out of the strained ingredients, along with a few small pieces of celery and onion, and pureed them with just a touch of added broth and a pinch of salt, and had a nice, faintly savory pudding. 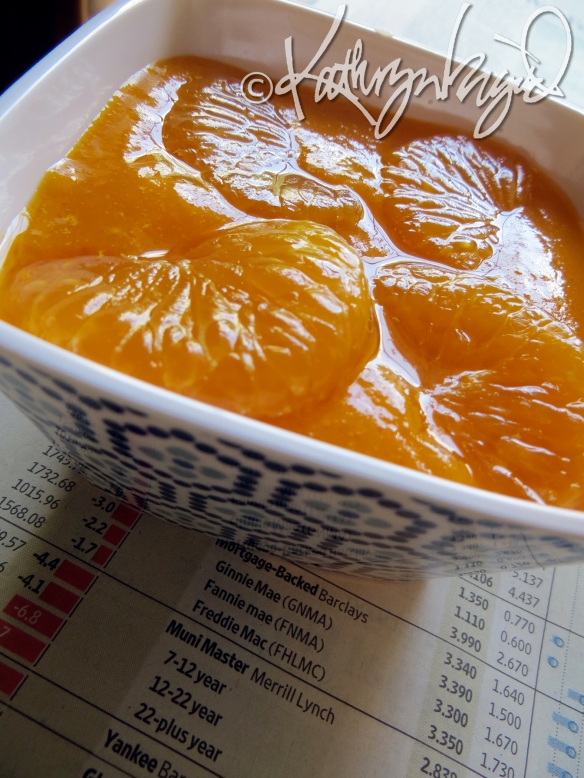 Adding some juice-packed mandarin orange segments (reserving the juice for later use elsewhere) made it into a really tasty little side dish of comfort food with very little effort. Warming some black raspberry jam and drizzling it on top of the pudding or swirling it in made it into an even jazzier little light dessert. The contrast of the punchy colors was matched by the contrasts in savory and sweet, in the soft pudding and bursting orange sections and the tiny crunches from the berry seeds.

All that was left for reinvention from the broth straining was the marrow and meat that, while not enough to make a meal alone, still filled a bowl with beefy goodness. It was clearly too soft to be especially attractive as a pot roast sort of thing, let alone a plated slice of anything recognizable as meat. Paté came to mind. Heck, I’d already had the stick blender busy to make my carrot pudding, so why not put it to further use on the day? The beef bits, along with a couple of hefty tablespoonfuls of butter, a half teaspoon or so of salt, and a little broth to make it workable, got pureed into a smooth, buttery spread that waits in the freezer for the time when it will be thawed, chilled in a ramekin, and served with crackers or toast, cornichons and cocktails, just as though I were an ideal 1960s magazine housewife. Well, I grew up in the ’60s and I’m a homemaker; close enough.

It may not look like much, but as a poor-man’s fois gras it’s dreamier than you might think. I like to think of myself in a similar fashion, ’60s housewife or not. Wink-wink.