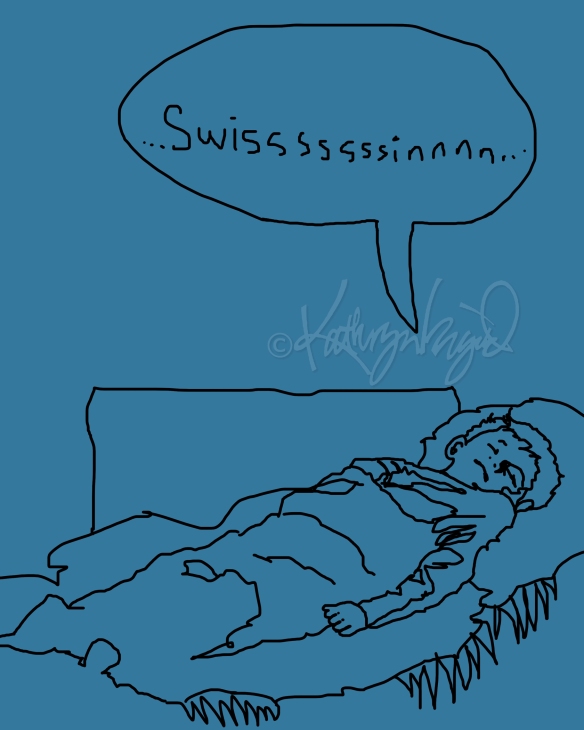 Ever wonder where little children get their surprisingly sophisticated or apropos neologisms from when they pop up with those odd comments seemingly out of the blue? I know I do. I’ve spent enough time pondering the verbal magicks of the offspring sprung from sisters, friends, and relatives, to think that there is something more than mere chance at work some of the time…but, what? Sheer serendipity seems inadequate to explain how logical or fitting or uniquely unlike what one ought to expect from these kids such prodigious pronouncements can be. From what ineffable sources does infant etymology spring?

There’s one goofy expression long used in my family that makes a fine example, I think; I hadn’t even thought about the oddity of the word and concept in ever so long, but when it came to mind as suited to an occasion arising just the other day, I pondered yet again how such things can arise. The story behind the word/idea is that my youngest uncle, at the time still sleeping in a crib but definitely speaking—as the youngest of six children in a not-very-wealthy household, I can imagine this was a useful space-saving device as much as anything else—was heard to be stirring one morning but hadn’t clambered out of the crib. So his mama, my grandmother, made her way in to see whether her boy was actually up and about or had merely made a sound in his sleep.

It seems he was in an intermediate state, still not fully ready to get up and attack the day, but not deep in dreams anymore either. When asked what he was doing, his response was that he was “just Swissin’.” That seemed to require a bit of clarification. “What?” His response: “I’m not asleep and I’m not awake; I’m just Swissin’.” For the longest time, I thought of this invention as being the equivalent of behaving like the Swiss—existing at neither extreme but in a neutral space between the two. But later, it seemed to me that if he’d had the slightest contact with a real Swiss person, he could well have had a different reason for coining the word. In German, the similar-sounding word “zwischen” means “between,” and what could possibly be a better way to describe the state in which one is neither waking nor sleeping, but in that suspended animation reaching from one state toward the other?

The problem with this delightful theory’s seeming perfection is that if that little boy who became my uncle was hearing anything other than English spoken around him in his American home, it was most likely Norwegian spoken between his parents or other older relatives and friends, given their roots. So how did he invent and name that neat little idea of his? I can’t begin to fathom. But after having made that unexpected connection myself, long after the fact, I relish all the more our continued family use of the word Swissin’, and I thoroughly enjoy knowing that it is even better suited to the status of being neither-here-nor-there than any other single word I can recall. Is it the work of a brilliant linguist or the most excellent of accidents in speech? Neither; it’s just Swissin’.