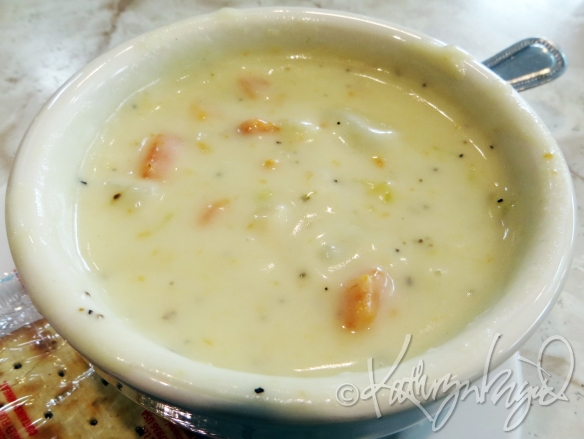 Lots of flour thickener = a chowder too glutinous for my taste. Good for installing wallpaper, but not light enough to show off the glam of its clams.

This summer’s travels in the American northeast offered perfect opportunities for me to revisit a dish that is a longtime favorite, be reminded of how much flexibility lies within its simple framework, and how much beauty comes from keeping it relatively uncomplicated in the first place. 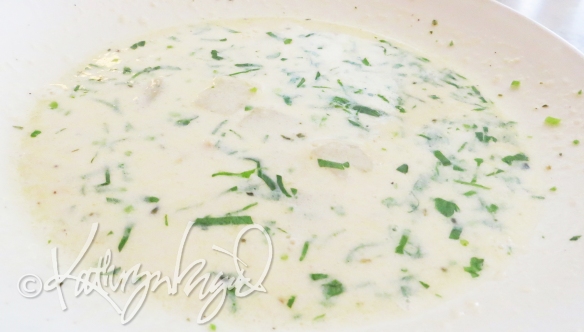 Better broth still doesn’t win the day if the clams are hiding under so much greenery I think I’m being served a bowl of lawn trimmings. Herbs are great, but too *many* fresh herbs can still overpower those dainty little fellas.

Not that I have anything at all against varying and playing with food. If it’s a great item, why, it’ll withstand any number of fiddling fools in the kitchen. Sometimes one even invents yet another reason to love the dish. There’s room at the table for as many delicious versions of goodness as there are diners.

For my own taste, I’ve had great Manhattan-style (red broth based) chowders and many fantastic variants of clam, fish, and mixed seafood stews and soups and chowders, a top favorite among them my brother-in-law’s salmon-rich bouillabaisse. Lacking immediate access to that, though, I may be fondest of all of a bisque or a light, creamy New England-style chowder. There are few things I like less than dense, floury heaviness in chowder, but that can easily be avoided by thickening the soup with little or no wheat flour and not using one of the other popular approaches (also wheat-based), that of thickening the chowder with saltines or oyster crackers. I see no reason to include any in it, because another traditional ingredient I do love, potato, adds enough starch itself to keep the chowder from being too thin. If I want mine thicker, I wouldn’t hesitate to mash a bit of the cooked potato into the broth, or simply add a tiny amount of potato flour.

But there is a standard set of ingredients that make bisques and New England style clam chowder the beloved icons that they are, and these give them more clear identity than any technique tends to do. Seafood, obviously, is central, and should be tender and fresh and sweet. Many who make chowder boost the ocean-fresh flavor by adding bottled clam juice, and while I think it tasty, I don’t think it absolutely necessary. If I don’t have any of that, I’m happy to boost the broth with whatever reasonably subtle umami-buzzing jolt I might have handy.

You already know I am far from a purist about practically anything food-related. And while I try to be rigorously appropriate about avoiding the offending blends or ingredients when feeding friends with kosher, vegan, halal, allergic, or other dietary concerns, if none of these are present I am not averse to mixing seafood or dairy ingredients with meats, and so on. First choice for seafood chowder liquid? Uh, is there any question? Seafood broth. If I happen to have seafood parts handy, the shells, skins, and/or bones of assorted fish and shellfish make a marvelous addition and the perfect flavoring agent for the broth.

Lacking that but wanting the flavor to be a bit more complex, I’d still look around my kitchen for inspiration. So if I have it and want to use it, I wouldn’t be afraid to enhance clam chowder’s broth flavor by adding some of my homemade chicken broth to it. Meatless vegetable broth, especially roasted veg broth, might be better, though, mightn’t it. I’ve found that roasting meat bones for my non-vegetarian broth is generally an unnecessary step, since the ingredients tend to rise and caramelize over the long, slow cooking time, so they get browned enough to intensify the flavor if I just give a good stir to redistribute the less-cooked ingredients every once in a while. But vegetables, requiring less simmering time than meaty ingredients, don’t necessarily get quite as well browned this way, so it can be better to go ahead and roast or sauté them.

Imagine the depth of flavor possible when you use the liquid made from simmering a pot full of fragrant, chopped and slow-roasted celery, onions, and carrots, perhaps some shallots or garlic cloves; possibly even sweet corn, red capsicums, and/or mushrooms, along with bay leaves, thyme, perhaps a little dill, and a toss of black peppercorns, then straining it. I prefer to roast veg with a bit of good fat, too, of course, being who I am. If I want to keep the soup meat-free, I’d keep it very mild in flavor, choosing something like avocado or palm oil for the fat. But if I want the intensity of it, this is the one spot where I’d likely cast my vote with those who find bacon an acceptable or even desirable addition to clam chowder.

See, I don’t like the texture of bacon itself when it’s been cooked into wet foods. Might as well be raisins. The latter are, to me, too often bloated and slimy when cooked or even baked. I know, I’m a jerk, hating on poor, defenseless raisins. The flabby and listless look and bite (or lack thereof) of bacon cooked and left in wet food like a chowder doesn’t thrill me, either. But that flavor can be a great complement to chowder, if you’re a bacon fan. So roasting vegetables for veg broth is a perfect way to take advantage of the flavor without the texture, simply by giving the veggies a goodly slick of bacon grease before their roasting. If the broth is being used strictly for seafood chowder, you could even add bottled clam broth to the vegetables right along with the water for the later slow simmer into soup base.

All of this is a kind of long way of saying that what I really crave, when I’m in the mood for chowder, is seafood in a creamy soup base. Not much else. So: broth. Russet or Yukon Gold potatoes, celery, and carrots that have been diced fairly small (about 1/2 inch pieces) and oven roasted or sautéed until crisp-tenderly caramelized in butter, then thrown into the strained broth to bubble into toothsome tenderness throughout. Seafood added, just long enough to cook through (or if precooked, to warm through). Cream or half-and-half added and warmed. For those who don’t mind alcohol, a tot of sherry or brandy is fabulous added now, at the last, or even served at table as a condiment, along with the mill for grinding out fresh black pepper.

Saltines and oyster crackers bore me a little and just get in the way of good chowder. If I want an accompaniment, I’d rather have a nice crispy Parmesan tuile or two, or some straight-from-the fryer homemade potato chips alongside. And a big spoon, so I can sit and inhale tantalizing steam while I wait just until the chowder’s cooled enough to eat.

Enough dream-state ‘cookery’. I’ll end this episode of food fantasizing with the magnificent real-life seafood chowder we ate over the weekend with our superb hosts on a beautiful coastal sightseeing drive from Halifax to Peggy’s Cove, Nova Scotia, and back. Our friend Catherine cooked up a truly gorgeous chowder full of Canadian Atlantic-style goodness—homemade lobster-shell-based broth with white wine and cream and full of perfectly cooked russet potato cubes, tender scallops, chunks of haddock, meat from that freshly prepared lobster, and thyme. Little else. Exquisite. Served with some more (locally produced) white wine, warm bread, and cool butter, it was a spectacular treat. No, it was better than that. It was a spectacular treat in superb company. The genuine ‘secret ingredient,’ of course, that last one. A taste of perfection. 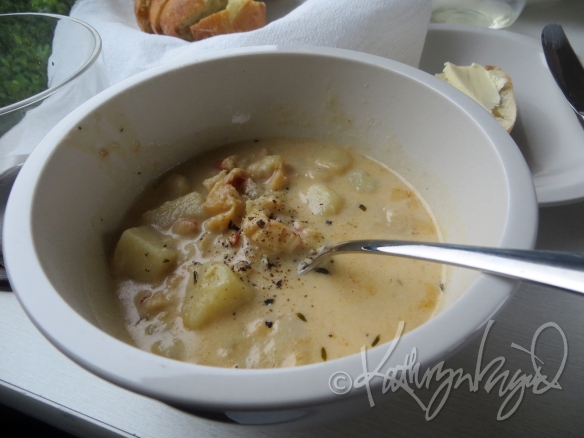 1 thought on “Foodie Tuesday: My Choice of Chowders”