I’m blessed to have ‘peeps’ that do, in fact, peep to me. Sitting at my desk and looking out the window at avian neighbors that stop by to enjoy the all-you-can-peck buffet I keep full just across the patio for our mutual enjoyment. I’ll let them do all of the actual dining, as despite my occasionally nibbling seeds willingly, I don’t often lust after hot pepper infused suet and desiccated mealworms garnishing the grain-and-nut munchies. Shocking, I know. 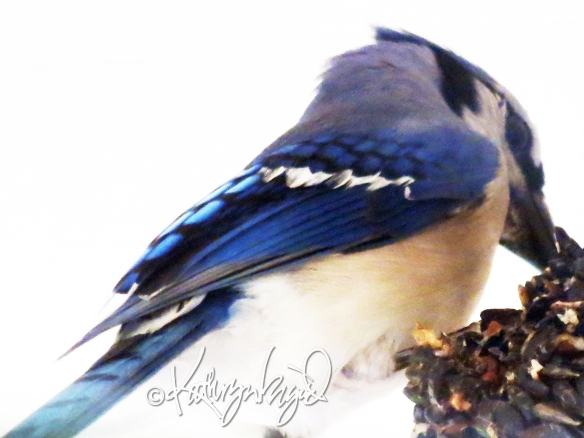 The birds visiting are mostly permanent and part-time residents of our backing greenbelt, and there are regulars and also unique and unexpected friends making occasional appearances to brighten the day here. We see plenty of the common local Bewick’s wrens and chickadees, softly hooting mourning doves and robins and the like, and every one of them is a delight to see and hear. I love even the ones soaring high enough overhead that they never come close enough to snack at our feeders, too: floating vultures, keening hawks, and a majestically flapping heron or two pass by on occasion. The hummingbirds, mostly Black-chinned and Ruby-throated little charmers, buzz around, chittering and bickering over the deep blue blooms of the blue sage, and make my heart flutter almost as ridiculously quickly as theirs.

But I think perhaps my shallowness is evident in my taste in birds as much as anywhere. I’m especially taken with those that are showy and exaggerated, all the more if they’re full of mischief and play. The cardinals that spend a great deal of time here, one mated pair in particular, are a bit shy and skittish but when they settle onto the feeders they are a show no matter what, between the female’s magnificent airbrushed-looking feathers with their blush of coral and red, and the male’s brash scarlet suit. And more recently, our patio’s been adopted as the dining place of choice for some mighty splashy jays. The blue jays I grew up with in the Northwest were much more often the darker (though also dramatic and gorgeous) Steller’s jays, but what we see here are the more brightly bold black, white and Blue Jays, and they are a grand entertainment indeed. 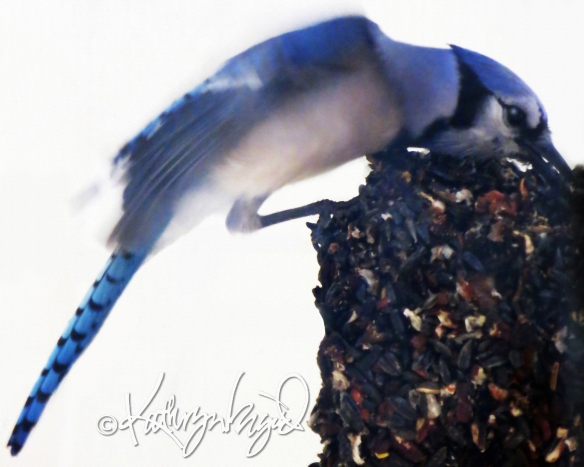 The jays that visit us are prone to squabbling and banging around in the feeders, eating like winged pigs and strewing seed hulls and detritus all over the place, flying heedlessly around as though they hadn’t a care in the world, and then taking fright at the slightest shadow, suddenly veering up in an explosive launch and leaving the feeder swinging. I can’t often get to my camera in time to freeze their fantastical and pretty foolery for later enjoyment, but I never fail to find them immensely entertaining and wonderful to see. Each moment spent watching them cavort in the sun and shade makes me feel a bit more as though I myself could take wing and burst across the wild blue sky.