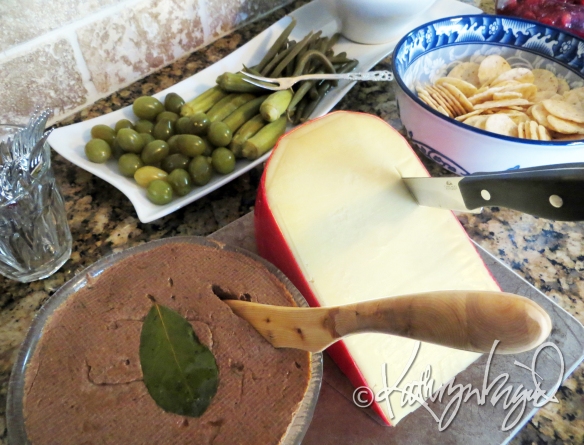 Just for starters…don’t forget that previous meals’ leftovers can be reconstructed into the appetizers for the next meal, like what happened with the remaining bone broth ingredients that lived on after soup-making and made such a nice beef pate for Thanksgiving.

A signature of holiday cooking and eating is, logically, a host of holiday leftovers. After all, we tend to cook and eat more of everything in the first place, when holidays happen, so there’s bound to be more food around, and since most of us do fix more of our favorites on and for celebratory occasions, we’re a bit more likely to want to be careful not to waste them. Holiday leftovers are tastier than everyday ones, aren’t they.

So it is that remnants of glorious sweets will continue to lure us into the ever-so-aptly named larder and the refrigerator will, after Thanksgiving, still have some turkey lurking in it too. While a great turkey sandwich is far from restricted seasonally, the grand whole bird in its pure roasted form is less commonly perched on dinner tables outside of the Big Day, making it anything but boring to have the leftover turkey and its trimmings served without tremendous alteration at least once or twice after the party has passed.

Red relishes are such a nice touch on holidays that when a friend said she was bringing whole cranberry sauce, I decided to add the jellied kind *and* some home-pickled beets for the trifecta.

This year, Thanksgiving at our house was both traditional and extended. Ten of us sat around the table: our musical friends from Germany (why did I write Austria, then?), Hungary, Canada, Puerto Rico, Estonia and the Netherlands as well as the US gathered with our plates of roasted turkey and a fair assortment of other treats and sweets, and though we had our feast the day before most others’, the ingredients of food, drink, and conviviality were the same, and the leftovers equally profuse. My prepped appetizers, turkey, mashed potatoes, wine/stock gravy, creamed sausage, and buttermilk cornbread (the latter two, parts of the planned southern cornbread dressing, remained separate at my husband’s request) were joined by dishes the others brought–Greek salad, squash puree, homemade whole cranberry sauce, and carrot cake and handmade Hungarian biscuits for dessert. My own dessert offerings were the apple pie and Tarte au Sucre.

The Tarte was not only a good excuse for ingesting vast quantities of fabulous dark maple syrup but, as I discovered, when it’s accompanied by salty roasted pecans it becomes a perfect inversion or deconstruction of pecan pie, another very traditional Thanksgiving treat in many homes. I made my Tarte with a crumb crust of mixed pecans and walnuts, so it was perhaps already a variation on a nut pie before the garnishing pecans even arrived on the scene. In any event, it pleased my maple-fiendish heart.

Lightly spicy sausage in cream makes a good alternative to gravy for the turkey and potatoes, if you don’t end up putting the sausage into the cornbread dressing as you’d thought you were going to do…

The idea of creating a meal of any sort, let alone a holiday meal, for a group of ten people and coming out with everyone perfectly sated but without a jot of leftovers is, of course, more mythical than mathematical. It’s in fact ludicrously unlikely to happen, even if the ten are all people one knows intimately and whose preferences and appetites never vary–also, to be fair, a virtual impossibility–so the question of how to manage the leftovers with the best grace remains. In our house, that problem is never terribly difficult. First visitation of this year’s re-Thanksgiving was a smaller and simpler version of the original, turkey and mashed potatoes, cornbread and cranberry sauce, with a side of buttered green beans and bacon. Meanwhile, I’d already started a slow cooker full of vegetables and giblets while the turkey was roasting, and added the bones and bits afterward, so there will surely be turkey-noodle soup soon to follow. 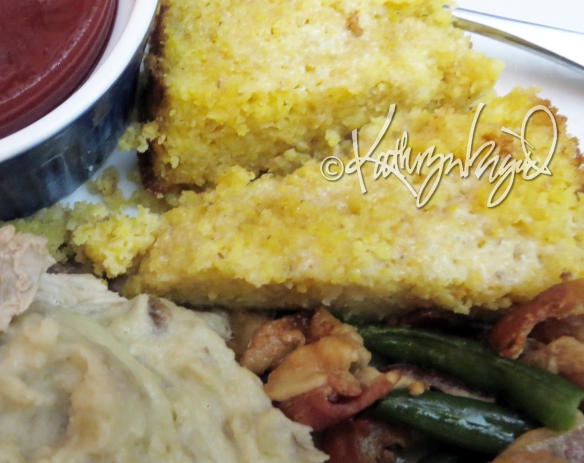 Thanksgiving, Round 2–and only the second of many, perhaps.

What comes after? Probably a little turkey curry or a sandwich or two, but not much more, because having grad students and young, single faculty members at table on the holiday also meant that it was rather important to see that they left with some leftovers of their own to carry them forward. Leftovers, truth be told, are really just a new beginning in their own way. Hospitality, you know, isn’t a solo; it requires participation. One person doing it all, no matter how perfectly, is not a party but a lonely and self-centered business and misses the point of the whole thing. 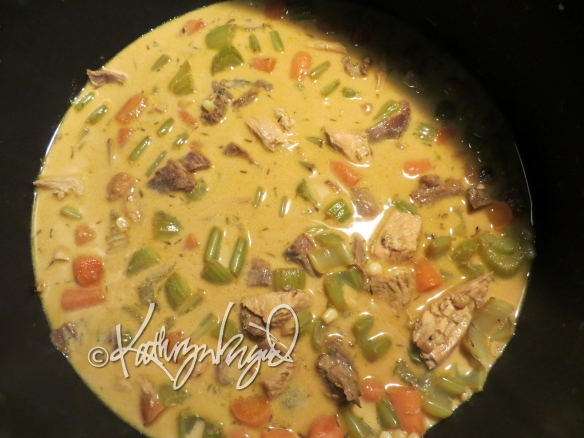 Ah, do not let the focus on the main meal eclipse all of the good that can follow: a mere creamy turkey soup is a heartwarming way to honor the memory of the great meal that started it all.

Let others partake, help, contribute. And yes, do give to them: share the feast, both in the party’s environs and in the sharing of all that surpasses what was needed for the moment. And share, first and foremost, your time and attention, your companionship and humor and warmth and love. Then there should be plenty of those for leftovers, too, or all the turkey and potatoes in the world will not be enough. Much better, more filling and fulfilling, to be so hospitable that it spills over everywhere.

The only thing better than a delicious dessert is just a little too much of it.

Since we don’t always make a big deal out of holidays, my husband and I, and even when we do get the urge to celebrate we’re not huge sticklers for partying on the officially designated day or with the popularly traditional foods and events. This year we’re being a little more predictable, perhaps, by having a Thanksgiving gathering with eight musician friends. We’re doing our dinner on Wednesday rather than Thursday to accommodate schedules, but otherwise we’re being more predictable than not. There’s a big pastured turkey, spatchcocked and dry-brining, in the fridge and it’ll be accompanied by plenty of at least somewhat traditional sides and garnish treats, and most fittingly of all for this particular American holiday, we’ll have US-dwelling friends from the Netherlands, Estonia, Austria, Hungary, Puerto Rico, Canada and yes, stateside gracing our celebration with their presence. A great way to remember part of what’s best about this country and what I’m most thankful for–and not just on this holiday.

I’m going with pies for dessert. That’s the real reason for today’s post title, not that I’m planning on getting plastered to celebrate, if that’s what you were wondering. Ahem!

Apple pie, as any of you who’ve been around here for any length of time know, is not just a supremely suitable dish for the season but my spouse’s first choice for dessert any time there’s the slightest possibility of having it. Easy choice, clearly. Another thing that’s wonderfully fitting for the season and my tastebuds is maple syrup, and since we have a jug of gorgeous dark Grade-B-heaven maple syrup, a gift from another friend, just beaming at us with its heavenly come-hither look from the pantry, I deemed it a sign that I should get around to trying my hand at another pie I’ve long wanted to make, Tarte au Sucre. Here goes!

Meanwhile, there’s other stuff to get ready. Spiced apple cider is in a big pot, infusing at room temperature overnight until I heat it tomorrow. Potatoes are [literally] half-baked and will get finished on the day as well, smashed with cream and butter and a little salt before going to table next to the chicken-white wine gravy I put up last week and am storing. The appetizers of Gouda, homemade beef pate and crackers, nuts (including some Marcona almonds I set a-swim in olive oil a couple of weeks ago) and pickles–homemade beetroot pickles along with southern style pickled okra, green beans and green tomatoes–are all ready to set out as we sip some bubbly and cider for a start. Since the turkey’s ready to roast all I have to do is take that big, handsome bird out of the fridge and bring it up to room temperature right in the pan it’s in now and roast it on the rack of celery, carrots, apple chunks, cinnamon sticks and lemon pieces it’s been resting on overnight.

I’m using store-bought bread but will hope to have time to make our friend Jim’s southern corn bread and sausage dressing, so ridiculously tasty that when he made it for me the first time we two ate most of the batch which I later learned from the written recipe is meant to serve twelve. Not kidding you.

I’m keeping the vegetable sides exceedingly simple, serving steamed green beans with bacon I crisped up and froze earlier, plus sweet coleslaw, so those will practically make themselves, being so easy and quick. What the others bring, if anything, will be entirely a surprise, with the exception of one person saying she was likely to bring some pureed squash and cranberry sauce, either or both of which would be deliciously appropriate. All of this, regardless of whether anyone does bring more, means that we will very likely have heaps of leftovers, one of the true treasures of the occasion and certainly one of the reasons we give thanks!

I will share pictures after the fact–not much to show for the process that will thrill or impress you for now–but first I would like to share with you my wish that whether you are planning to celebrate this American holiday this week or not, you will all be blessed with immeasurable reasons yourselves to be thankful. As I am, indeed, thankful not only for my many other privileges and joys, but most of all for the wonderful people filling every corner of my life, including you, my friends in Bloglandia. Thank You!