Kjøttkaker, as they’re known in my Norwegian-descended (and oh, how far we can descend!) family, or frikadeller, as the Danes and some other ‘cousins’ of ours call them, are simply and literally seasoned ground (minced) meat cakes. My husband finds them strange because they aren’t cozied up inside a hamburger bun, since that’s pretty much what the patties are, though usually on a slightly smaller scale. He finds it equally strange to serve them without a nice tomato-based sauce over the top of some beautiful fresh pasta, since again, they’re pretty much meatballs too, though usually on a slightly larger scale. And they certainly aren’t meatloaves, being far too teensy to serve sliced to anyone without smirking at the sheer silliness of it, though it might be worth it just to watch their expressions, while you counted out five peas per person alongside the meat and baked one fingerling potato for each. In any case, it’s really no surprise that these little dandies should suffer an identity crisis on this side of the pond.

Truth be told, said spouse isn’t a huge fan of ground meats outside of some favorite places where they commonly lurk, as in the previously mentioned hamburgers, or as meatballs in pasta sauce, or in a nicely spicy taco filling. The texture isn’t all that appealing to him without some distracting vehicle or accompaniment. I will have to continue on my search for some other alternatives or just know that any kjøttkaker cooked up around here are all mine for the munching. Hmm, was I thinking there was anything wrong with that scenario? How ridiculous!

Because I do like a nice chopped meat treat of one sort or another occasionally. So I made up a batch the other day. These are no more than a lightly-mixed blend of equal parts ground beef, veal and pork (about a half pound each, I suppose) with a couple of eggs to bind them and boost their nutrients a bit, some salt, black pepper, smoked paprika, ground coriander and a nice toss of shredded Parmesan for a touch of textural variety. I oven-baked them (in bacon fat, because I’m a flavor-holic), having made a big enough batch to freeze a bunch and have a few left in the fridge for weekday meals in the short term. Then I stuck the ones headed for supper into the skillet where the side-dishes were waiting, so all would arrive together hot at the table.

While the patties were roasting, I’d cooked up a nice big batch of crimini mushrooms in butter and my homemade bone broth, set them aside and lightly cooked some nice thin green beans in the fat of the pan, and then layered it all back up together. While the vegetable portion of the program rested a moment, I’d taken the meat patties out of the oven, poured off the fat and scooped up all of those nice meaty drippings into a little container where I whipped them up with some heavy cream. The drippings were already plenty well seasoned and nicely condensed by their medieval-hot-tub adventures in the oven, so I had Instant Gravy of a kind you’re not likely to find in a packet of powdered whatsis on your grocery’s shelf. Which is to say, rich and flavorsome enough even for the likes of me.

All I added at table were some nice little fresh tomatoes to add a bit of color both to the plating and to the palate, a brightener welcome alongside the warmth and savory goodness of the rest. A little shot of sunshine is always welcome, whether in the kitchen or on the grinning face of someone happily gobbling up what’s served for supper. 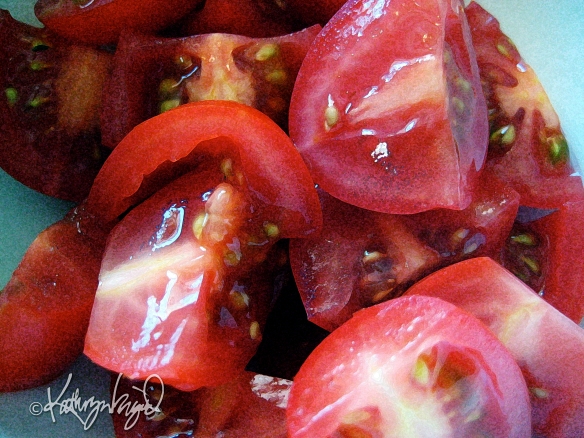