That magical time known as the Golden Hour seems to give everything, not just color, an extra fillip of beauty. Colors do, indeed, become warmer and more saturated when the sun is at such a low angle to the horizon as its place near dawn and dusk, but there is so much more to the mystical powers of those fleeting moments that it is a great treasure to be still in them and let the wonder fill me. At such times I feel more connected to nature and everything around me seems more in tune, better adjusted, and I feel that I am, too.

How can the mere angle of the sun turn a scrubby lawn into finely cut velvet? The touch of gilt on the scene makes every ounce of it seem that much more precious and valuable. The bejeweled day, in turn, makes the simplest action in it take on significance it never had before: the chattering of birds in the trees becomes a miniature angelic choir; the dipping of oars in the water turns from a quiet splashing to the whispering of poetry; the evening breeze that gently stirs shore grass becomes a delicate communiqué from the harmonic internal logic of the universe, and I am at one with it all. As the golden hour ripples through my environs and begins to permeate me, I almost feel as if I am gliding along their silky way right in sync with the rowboats nearby, waving fluidly as the grasses on the verge, tipping my wings with the evening birds to slide onto the branches of the trees. I am at peace with the world, and the world, with me. That is golden indeed.

Being Crafty is something other people do. I admire the feats of those who can crochet spectacular Afghan blankets seemingly out of thin air or decorate their homes for the holidays with recycled coat hangers and tuna tins and somehow make them look like a magazine cover. People who have the know-how, skill and patience to embroider babies’ bonnets, build palatial birdhouses out of scavenged fence pickets and carve perfect portraits of great historical figures out of turnips impress me greatly.

I, on the other hand, have been known to abandon ship mid-craft, or at the very least change directions radically when I feel I haven’t a hope of getting the hang of what my project was initially intended to be. My youthful embroidery days were ended when I spent a lengthy evening working on the details of some would-be floral tea towel‘s featured bouquet, stood up to gather my sewing and head off to bed, and discovered I’d embroidered through both the tea towel and the lap of my nightgown. My candle-making artistry had only its propensities for melting and burning (and thus, quickly, disappearing) to recommend it. Unlike those who are able to make fabulous sand mandalas with the grains arranged perfectly meditatively into millions of delicate otherworldly patterns would be, if not appalled, then at least mystified and probably saddened, by the strange mud-pies that would be the only produce of my efforts in that direction.

Pretty well any craft that takes any real focus and attention, let alone proficient control of the medium, is likely to remain out of my reach.

There are, however, certain tools, materials and proficiencies in the land of Craft that I can and do manage. One of the media I have enjoyed manipulating for playful, if not crafty, purposes at times is lightweight spackling compound. This stuff, made initially for repair of wounded wallboard and the filling of trim gaps by builders and handy-persons, resembles cheap bake-shop frosting so strongly in texture (and, I daresay, probably in taste, though that’s moot here) that it goes through an icing bag and tip wonderfully well. So it’s great for not only creating faux frosty baked goods but also all sorts of the same kind of detail work that plaster and woodcarving and metalworking artisans have used to create architectural accents and furniture details for eons, especially in combination with other small sculptural elements. Thinning the spackle just enough with water to go through a pastry icing tip and retain its proper density and texture and shape while drying is virtually the only difference. In fact, the spackle can be tinted in many of the same ways as frosting, too, though it may be painted and colored in many ways after the fact. 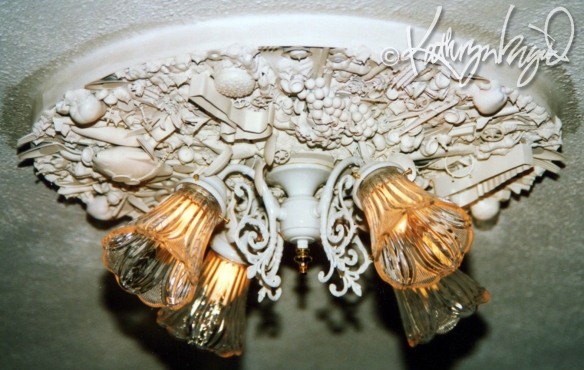 In any event, I’ve had fun with this magical past on occasion. I’ve made customized and personalized ceiling medallions with it. I made a nice big window valance that had all kinds of pieces and parts–food and cookery gadgets and the like–blending its own form and meaning with the rest of the dining room in which it hung. I’ve used it to create baroque picture frames and mirror frames. Probably the most fun project with it so far was making a couple of very rococo side chairs by upholstering them with tapestry-like fabrics and then building equally over-the-top sculptural frames and backs out of small objects, some pre-made and some of my own making from plasticine or wood, bone or clay or metal, and then faithfully infilled with spackle ‘frosting’ before I gilded it all with metallic paints.

What’s next? Who knows. But there are boxes full of fun waiting for me to make them into something new, and that little yet persistent itch returns from time to time, so undoubtedly there will be a next thing. Just you wait and see.

I’m fond of the idea of animal companions and the way that various spiritual and philosophical schools of thought have incorporated the concept of human-animal affinities as talismans, symbols, totems and the like–never mind the opportunities presented for animal appreciation in contacts with pets, farm animals, zoo denizens and the serendipity of wild meetings. I simply find animals intriguing and appealing, and the chance to be in friendly contact with any of them pleasing and attractive. When they become boisterous, and especially when they are threatened or threatening, not so much of course, but even in those states they are compelling subjects of interest.

Animals are beautiful, mysterious, sometimes cuddly and affectionate, sometimes regal and dramatic, and always rather miraculous in my view. As I’ve lived much of my life in proximity, one way or another, to interesting animals but never had pets or been a caretaker of animals directly, there’s a tinge of the exotic even in the most common and frequently seen birds, bugs and beasts, fish or fowl, tame or terrifying, that perhaps people having more direct relationships with the creatures would not see. Somehow, despite the frequency with which I may see them sitting on the road-lining fenceposts, dead trees and light standards, hawks become not only the focus of my attention but messengers and comforters and guides that reassure me and inspire me simply by appearing where they do and catching my eye. When the call of a full moon brings out more of the neighborhood creatures to enjoy its bright benefits, I am moved to feel that the presence of more animals (the wild ones from our wooded ravine and even the neighbors’ straying house pets) has some meaning and purpose and must be meant to please me as well.

It’s not surprising, then, that animals appear in so many of my artworks, both in their expected forms as portraits of a kind or characters in my visual stories, and often in more abstract influences on the pieces. As a carnivore myself, I am not averse to eating animals as well, but my appreciation in this regard is enhanced the more when I can make complete use of the animal’s sacrifice, say, in using not only all of the meat but also cooking down the bones for delicious and healthful broths and then still having the beauty of the bones that have not been utterly disintegrated in that process as potential art materials too. 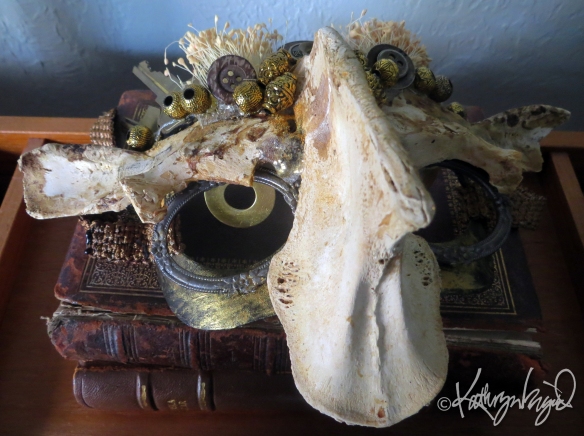 Some marvelous turkey bones, for example, not only supported the original bird that became the crowning glory of a roast-turkey feast (or, more accurately, two or three feasts at the least), but then became soup and sauce base in a long slow cooking and then, as the bones came out of the broth, beautiful and earthy and sculptural objects that in turn made me think not only of the turkey itself but also of all sorts of other creatures whose bones and skeletons and exoskeletons make them so remarkably lovely and strange. That is how a turkey breastbone became, in my mind, first a nose and then a beak, and finally, when the ‘beak’ was matched up with other bones having the right shamanic shapes, combined and decorated and gilt and otherwise conglomerated, the bones became the structure of a different bird altogether. In a turkey I found an owl–a Great Horned Owl, or to be even more precise, the Spirit of a great horned owl–and perhaps that reflects best of all how I see animals.

For I would include the human animal, naturally, in the list of perplexing and amazing and funny and marvelous creatures that capture my imagination and that, in its own way, is a species full of exotic mystery and charm. That makes my own life, presence and bones a collation of possibly only practical and ephemeral and biologically ordinary, yet even in those regards, mythic, parts that fit in their infinitesimal way quite neatly enough into the grand scheme of existence. I suppose it’s a reflection of that, after all, that I see and seek in admiring animals as I do. Perhaps it’s legitimate that I should make shamanic masks and look for meaningful appearances from the many winged and hoofed and spirited beings surrounding me daily and nightly, throughout my life. 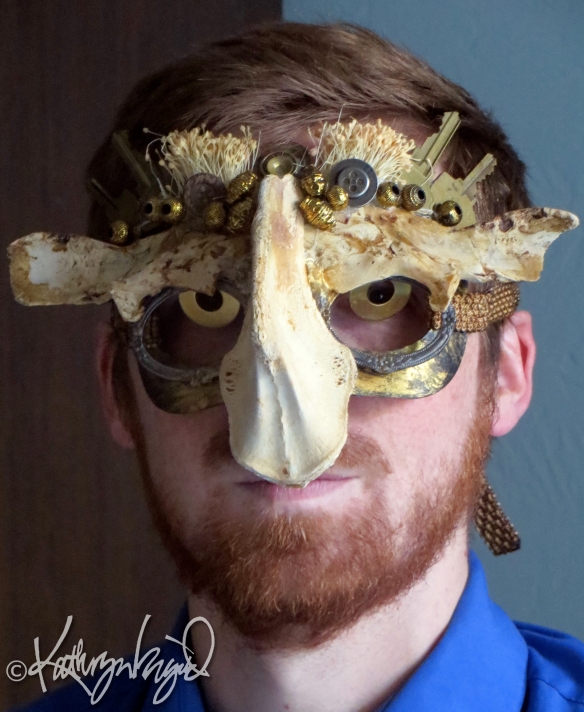 If you can’t make a grand entrance, at least try to make a spectacular exit . . .

The way my insurance is freighted

With small-print and guilt, and prorated,

I find that this chick

Who can’t risk being sick

Can afford to be

Campfire Song for the Unwitting Centerpiece

Singing silly campfire songs, we sit at either side

Across the pit and toast marshmallows, making note how wide

And high the flames can leap at will, and thinking if they might

Be quite sufficiently stoked up by middle of the night

To throw something substantial in to roast before the dawn,

Perhaps a certain someone here we’ve finally settled on,

Whose camp-songs so annoy us; cook to ash before next day

Our deep-disliked camp counselor: our own auto-da-fé.