It should be noted that while I prefer my prawns cooked in various ways, I would trust a sushi master to feed me uncooked ones without (as my Oz friend and colleague John taught me in grad school would be a less kindly gesture) either giving me or coming the proverbial ‘raw prawn‘. Old-school colloquialisms aside, it can be a great kindness to feed me well prepared prawns in a number of guises, as they’re not only tasty protein sources but well respected in a number of the world’s great cuisines. I’ve had the good fortune to live and/or vacation in a few places noted for particular kinds of prawns and shrimp, and when they’re ‘done up right’ I would be hard pressed to resist them as a top choice for eating.

In their compact and sturdy form they do lend themselves to skewering and grilling or to the great dive-in-and-get-messy kind of eating in a traditional Shrimp Boil or rekefest (the classic Cajun and Norwegian shrimp-eating parties, respectively), and I’ve certainly been served spectacular ones whole in dreamlike paellas, gumbos, cioppinos and other dishes. No complaints here! But when it comes to fixing things myself, I’m more inclined to think my fellow diners might like to be as lazy as I am, given the chance, and prefer most often to peel and devein shrimp and prawns before using them in my cooking. There’s no reason not to use the shells then and there for cooking up in a great batch of broth, of course, so I don’t see the necessity of wasting them, but I love to be able to eat meals unencumbered by the slowing process of dressing out the food unless it’s really a necessary part of the experience. Once the critters are cleaned, the meal prep is just as easy anyway, and if broth is on hand as a result, it’s the perfect base for an enriched soup or sauce in the bargain.

So what do I use these splendid shellfish for, finally? Nearly anything is good with such a sweet, clean taste and firm yet delicate texture. Shrimp puree, as I’ve mentioned before, is a fantastic binder for fish cakes because they don’t dull down the flavor like a starch binder (flour or crumbs, typically) would do, and though I haven’t tested it yet I’m certain it’d make a grand seafood soup or sauce thickener as well. But beautiful prawns deserve respect, too, in their unadulterated-yet-naked form, so they feature in a wide variety of dishes chez moi in addition to the aforementioned international classic presentations. 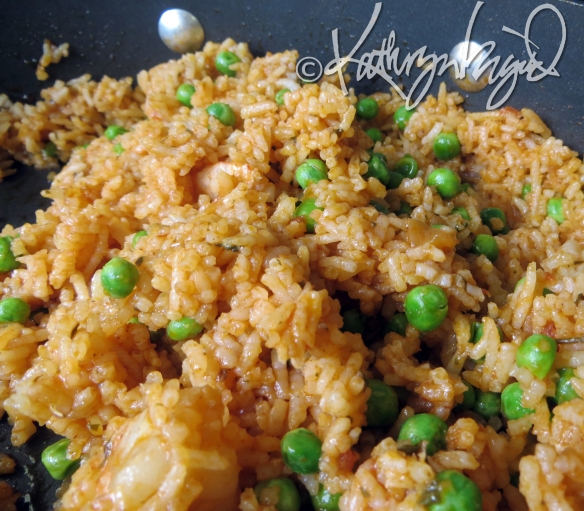 Curries probably top the list hereabouts, mainly because both members of the household are fans of curry in a wide range of styles. Many classic Indian and Indian-influenced sauces and dishes, in fact, lend themselves beautifully to showcasing shrimp: butter sauce, mainly seen on American plates napping chicken, is one marvelous option, as are Tandoori-spiced grilling on a skewer, prawns biryani, and prawns simply seared in ghee and garam masala and served with fragrant rice.

Italian cooks, too, have given us a multitude of glorious ways to honor the delicious beauty of these shellfish, not least of all in a beautiful marinara sauce over pasta. If you want any advice or inspiration whatsoever regarding Italian cookery, you can’t do better than to visit my friend Chicago John over at his blog From the Bartolini Kitchens, and you can do your own happy swimming through all of his shrimp- and prawn-related dishes with a quick search there. But despite my reverence for John’s glorious and historically rich cookery, I have been known to dabble in my own variants at times, and think I didn’t do too much harm to the image of the Real Thing. One example of this would be when I make my version of prawns Fra Diavolo, which according to Signore Mario Batali is Italian-American anyway, so I have no compunction about further stretching the idea. For mine, I make a sauce of tomato passata with shallots, a splash of a nice, intense red wine if I’ve got one open, a squeeze of lemon juice, a good grind of black pepper, oregano, basil, and a hit of red pepper flakes, varying the amounts to the tastes of my fellow diners, and finally, warm the prawns in the sauce just until they’re pink and curling like a charming devil’s tail. 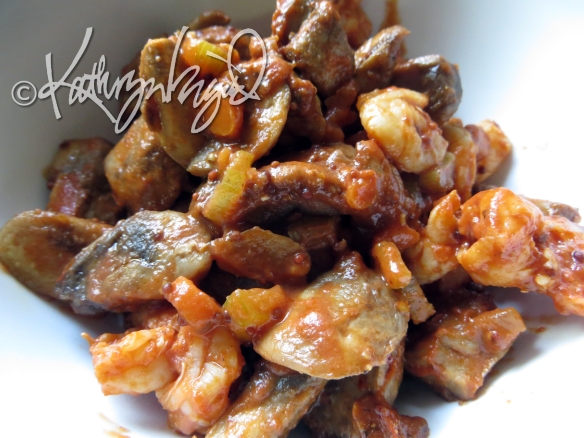 You who love shellfish equally will know that I could go on rhapsodizing about them and the many ways in which to dress them up and swallow them down, but for now I think that that should be the end of this tale.