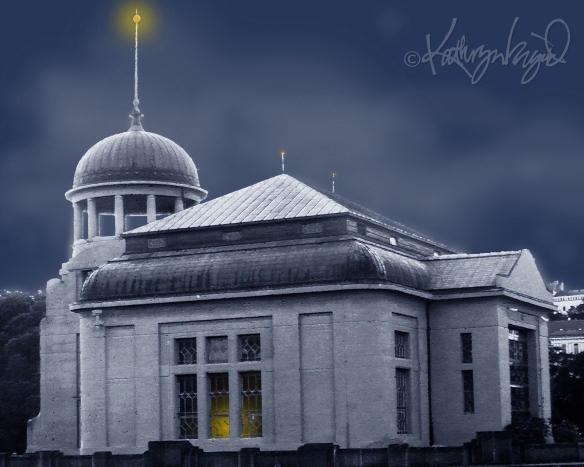 And bite you on the ankles as you pass—grownups forget to fear it, though, alas!

For in the passage of the years they’ve grown to fear only the earthly, and bemoan

Mere politics and taxes, while a child retains the wisdom that the brute and wild

Still hides among the passages of day, waiting to snag unwary young at play.

On Halloween, adults recall but faint and humorous details of ancient taint

And treachery, the light dust, if you will, of ghostly tracks upon the windowsill

Or campfire tales meant less to warn than joke at quaking children by the fires’ smoke,

Forgetting that what was, remains still here: the monster that can swallow all is Fear.

Years ago our family lived near a wooded area where all of the kids in the neighborhood loved to explore and build forts and play, but the youngest among us wasn’t permitted to go there alone, for obvious reasons. The training was attested to by the little girl from next door who announced quite solemnly to my mom one day that her “mother always told [her] never to go into The Forest.” This little ditty is for Micki.

Don’t Go into the Forest

From long ago, our elders cautioned us

That in the wood there lurked a dreadful beast

Whose fangs were fiercely fine, and for whose feast

A hearty haunch of whole rhinoceros

Was scarce an appetizer, and the main

And heroes snapped up, each, in single bites,

Made more delicious by their screams of pain.

Our fear of this stayed abstract, since the hurt

Inflicted, terrible enough, was made

For full-grown animals and men, which stayed

The doom from us—but then we learned dessert

Was Children, and we changed our minds, for good,

About the lure of wand’ring in the wood! 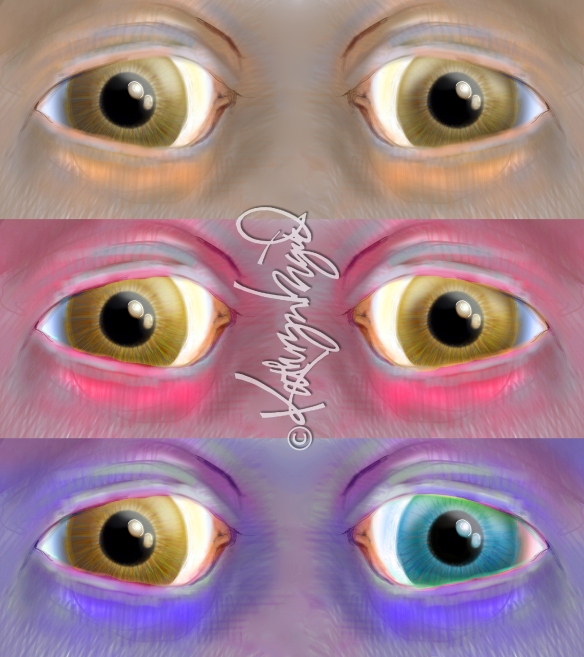 In Dash’s closet there was a very hard-to-reach spot at the very back of the top shelf, and he was quite happy that his younger sister Mattie couldn’t reach anywhere near it. There was a large jar there that he prized beyond any other thing he owned, even his pocket knife and the doll that he loved as long as his parents would only call it an Action Figure in front of any of his friends. The jar gave off a very faint blue glimmer that was even visible on the darkened closet ceiling after the bedroom light was switched off, and it pulsed comfortingly at young Dash as he lay across the room gazing on it while drifting off to sleep each night, dreaming eventually of the wonderful things that would happen when the creatures he kept in the jar finally came to their full maturity. He remained, as far as I know, blissfully unaware that they were beings of his little sister’s making and left for him to find and nurture. He may have begun to wonder what exactly was brewing when his Action Figure seemed to have moved to the far end of the shelf one morning of its own volition and then disappeared entirely until it resurfaced at the end of the week in the bathtub drain, one arm missing and covered with some kind of sticky corrosive ooze, but I imagine that he guessed Mattie might have had a hand in this trickery. The relocation of Dash’s pocket knife underneath the heavy jar was a harder to explain, more puzzling development. 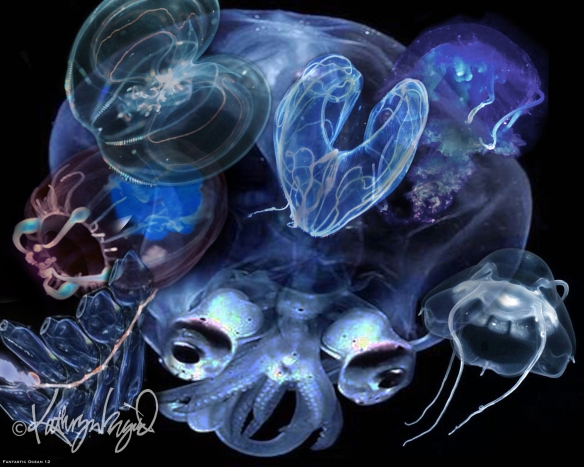 No matter how impressive and terrifying the monster, there’s always something that can defeat it. Most monsters have their own monsters, when it comes right down to it. Their tormentors may be superior powers, but in truth, it may well be the simplest and smallest, most innocuous detail that thwarts the fiercest monster.

Is it his own greed and hubris, or is it a clever prank I pulled that takes down the mighty monster? Not that it matters, as long as I win the day!

You stole from me an hour

Of sleep that should have been repose

With twisted, dark and sour

Of ghosts and ghouls and glee-

For if you deign to torture me

I’ll out you in a rotten verse

And you will lose your mind.

And none suspect me of this drink but clinically insane

And paranoid-type fantasists whom no one else believes

When they accuse the pretty bird that flits in flowers and leaves.

Though tiny as a bumblebee, I may grow round and bloated;

Good looks and family heritage (and, not the least, my name),

My shapely belly and my speed of flying fast as flame.

It’s not that I’m nefarious, invidious or rude,

But merely that I have a taste for human blood as food,

And do not fear: I’d never kill you outright when I dine—

Far rather sip and savor you as vintage claret wine.

Moths have a potent duality of effects on me: they attract and repel with just about equal force. On the one hand, there is their Victorian opulence of velvet wings and ostrich-feathered antennae and their widely looping sweeps of flight as if borne effortlessly on air currents themselves rather than lofting on and above them under power. They can look like jewels tossed into the air or, as hawk moths can sometimes do, trick the unwary watcher into thinking they’re bright, buzzing hummingbirds on the wing.

On the other hand, that sort of squishy, bloated, heavy softness of moths’ bodies and their voracious appetites for things I’d rather have kept to myself (dry goods in the pantry, tender leaves in the garden, and favorite fine woolens) fills me with nervousness that makes the revulsion they inspire in horror stories utterly plausible to me. I can’t help but remember the sweltering summer night when I was young and my family, having been out for a happy holiday evening, stopped at the local gas station to refill the bottomless tank of our giant station wagon; since it was so sweltering, we all piled out of the car to go into the tiny, grubby cashier’s hut where an electric fan was humming and, having an uneasy sense of something untoward behind me, I turned around to see a veritable dust storm of fat moths, attracted by the shop’s fluorescent lights, throwing themselves in spongy, flapping frenzy at the glaring glass until it was almost opaque with their wing-scale dust. Oh, yes, and the fabulously nasty short story ‘The Cocoon’ (John B. L. Goodwin) has never quite left my subconscious mind (awake or asleep) once I read it a few decades ago.

On top of all this, I married a guy who had once had a small moth fly into his ear, get caught and frantic, and instead of finding its way out, worked its creepy, fluttering way right down to beat against his eardrum until a doctor could eventually get the creature out of there. Enough said. I can still look, at times, with a certain dispassionate interest and think of moths as intriguing bits of scientific wonder and visual astonishment, and then I must quickly look away again and reassure myself that there’s not something truly wrong with them. I did at least decide to write a little bit to see if, in the incident of the attack on my husband’s ear, I could imagine the experience from the moth’s point of view. 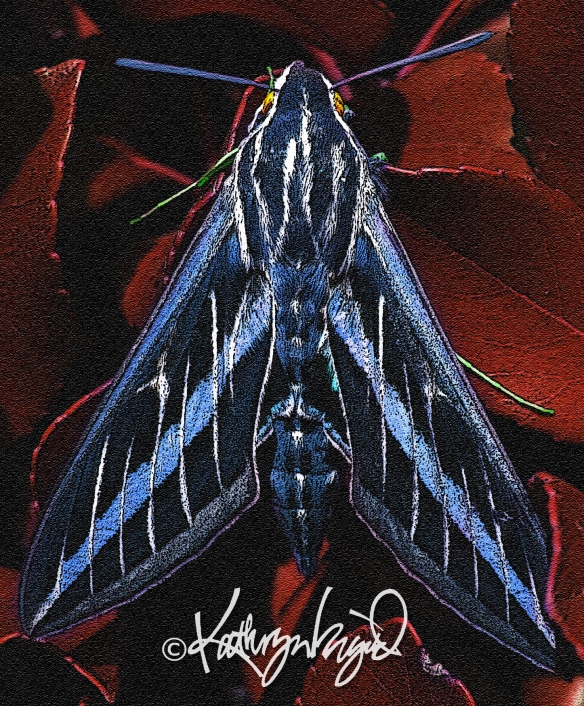 I crawled the narrow halls in

But too tightly fitted in, too close,

No chance of going back or backing out,

No scent I could recognize to bring me

Back to the distant shore,

No vision, not a speck of spectral light to give

A guide around those curves crepuscular, those turns

Winding ever more toward claustrophobia, to where

The heat was growing more intense, the sound

Of a pulsing drum seeming to speak of waves, making

Me dream the ocean lay ahead—but behind me, in

The now impenetrable night, some Thing, a dragon

It seemed to me, began to drown the liquid lure

Of the drumbeat ahead with its own more frightful,

Louder noise, and then to scrabble wildly at me

With its terrifying claws, at which it seemed

The labyrinth must finally swallow me and

Draw me down into its fatal end—but then—

In a turn of events that was quite shockingly detached

From any turns my path had made

Over on its side—there I lay, too fixed

In the halls’ constricting ways to turn and follow or

To roll, and the sea broke forth on me at last, a rush

Of saline waves tearing upon me, heaving me out

Of where I’d wedged, and in a cataract, sent me

Blasting right back through all the sightless turns

Of that preternatural dark, shot me with my sodden

Useless wings back into blazing day where I

Could lie, quivering faintly in my long-lost world,

Deciding whether it was time to die or time

To spread my fragile wings and see

If there was any life left in them.

[In a Really Creepy & Inappropriate Way]

Thought I was your stalker, violent,

Pervert peering in your casement,

Clear from attic to the basement,

With my satellite trained on you

All the way from where you’ve gone to

From my distant lair? I’ve got you

Hid from trouble while I watch you–

Baby, you’re not scared now, are you?

I’m just trying to watch out for you;

If I didn’t, who could keep you

So you won’t become morosely

Sad and spooked at all; to

Keep you safe and sound; I call you

In the morning and way later

Just to keep away the hater

Take your keys, your watch, your dollar,

Keep you sleepless, full of sorrow–

Does it matter? Not much; never mind. As it happens, I was a little hazy to begin with, so there’s not much worry about the old marbles disappearing. Who really needs marbles anyway, except for a game-playing champ or, say, Michelangelo. For me, the touch of lunacy just adds a little color and a lively element of surprise to my everyday existence. 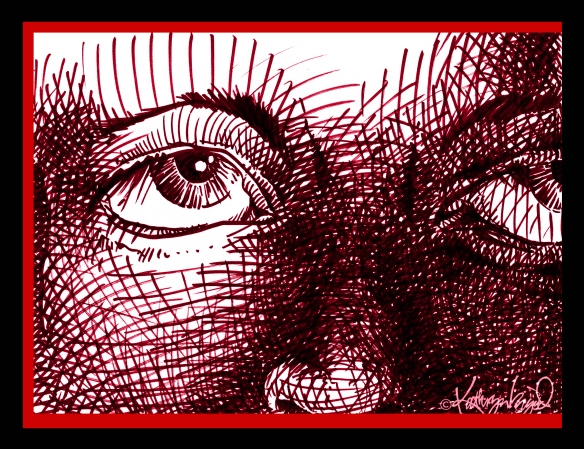 My fears are principally these:

Of sharks, the dark; of killer bees;

Of speeding cars and drunken louts

That race them through the roundabouts;

Bloodsucking leeches; of the kind

Of beasts that populate my mind

In doctors’ offices; of tests

That only earn me second-bests;

And most of all, I fall in tears

Lest someone should unmask my fears!

In my youth my friends and I,

When we were of a mind,

Were seekers of a kind,

But then grew old and cynical,

The fright of not just how or when,

But whom, we feared to find.

Things of which one ought to be scairt

The fretful Porpentine, I hear,

Grows scarier from year to year,

No less than Jabberwocks and ghouls

That frighten us and make us fools,

And night-lights, all us children who

As long as I can crack jokes about it, there can’t be anything gruesome or terrifying or unnerving at all about dying. I hope. (She said, winking and smiling slyly.)

How all your headstones gleam!

How delicate and marvelous

It’s sweet and quaint and dainty,

The peaceful way you lie

Filled up with rotten corpses,

Under the sunny sky. 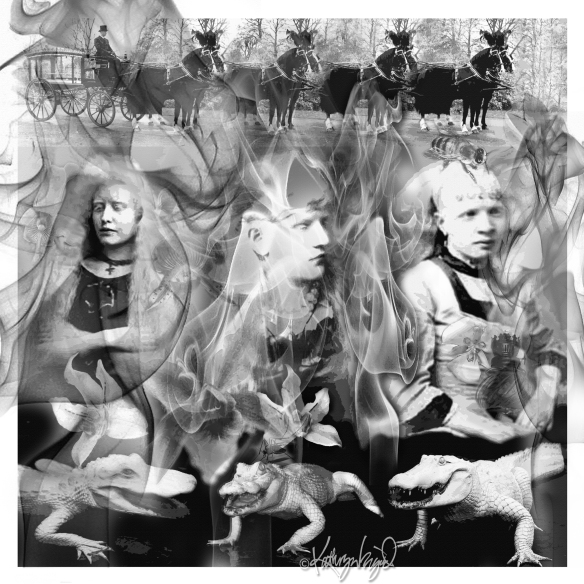 The way the flowers grew in shade,

I knew at once that one fine day

All prearranged, as though pre-made

Their pearly skin as pale as ashes,

Between the funeral-wreathed front doors,

With passengers in widows’ weeds

As fitting as the hellebores’.