Lest you think I’m so thrifty, what with my numerous posts regarding the delights of leftovers, hashed and rehashed, that I’m not equally overindulgent when it comes to food freshly prepared, I could just refer you to all of the other Foodie Tuesday posts regaling you with proof positive of the opposite. Wherever, whenever and however I can get my choppers on it, I love good food. But of course if someone else has done the preparation, it’s often that much more to be–no pun intended–relished. Who doesn’t love having somebody else do all the work, I ask you.

So when I do go out to dine, I’m very pleased if it turns out there’s more to the meal than can be eaten at one sitting. Good once, good twice. In fact, good twice can = good at least three times, as in a recent casserole-like conglomeration of leftovers from eating out more than once upon a weekend. Convenient to the occasion, I had picked up a small carton of ready-made Parmesan tuiles (yes, I do know how to make them by hand, but there they were staring right at me in the store) and had also just taken it into my head to also make a sort of onion jam, so I already had good companions to side the dish. The ‘jam’ was simply two large yellow onions all sliced up thinly, three modest sized navel oranges (cut segments plus the peel of about a quarter orange, chopped), a half cup of butter and a half cup of dry sherry, a big pinch of salt and a couple of tablespoons of honey, all cooked down together for about 24 hours in my slow cooker until fully caramelized. The tuiles were of course prepared by the even more complicated method of Open Packet, Place Contents on Plate variety.

In spite of such ridiculous ease, the simplicity of preparing the ‘casserole’ was its rival in that regard. I chopped up and stirred together these leftovers from my weekend restaurant peregrinations: 1 chicken paillard, grilled with Italian seasonings and heaped with diced ripe tomatoes and parsley; 1 handful of hand-cut french fries made in beef tallow; about a cup of deep-fried zucchini, light breading and all. I seasoned them with a little smoked paprika, mixed them with about a half-cup of plain yogurt and a quarter cup of shredded Parmesan cheese, heated the whole thing in a covered casserole until it melted and melded together, and voilà! Instant main dish happiness. That it all came together with so little effort on my part only added to its savor. ‘Cause that sort of lazy success is exactly what appeals to this person who is mighty thrifty with her kitchen time. 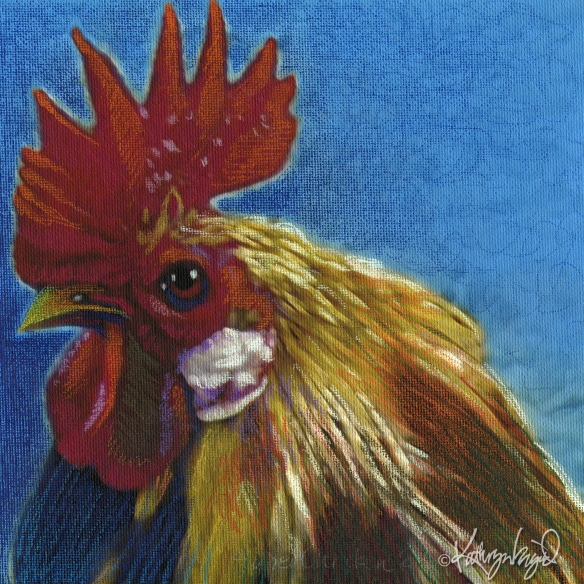 Sweet, blessed sleep! Yea verily, I got to sleep until the morning was almost gone today, and ohhhhh, how lovely it was indeed. Now this is vacation. A true holiday. Never mind the fun things we do, the glorious people we see, the magnificent scenery, it’s the sleep, Baby!

I don’t feel especially guilty about it, as you can tell. We once lived next door to a rooster, one of that breed who are supposed to be known as the royal emissaries of the dawn, but who deigned it his personal form of rule to choose when he would actually crow, preferably sometime in the early afternoon or perhaps around, no pun intended, the cocktail hour. I really admired him. I think that if I couldn’t choose when to be sleeping and when to be awake (even, astonishingly, productive at rare times) I would be a truly miserable character.

Instead, I get this great opportunity and I nab it gladly. I will go with my husband and complete an important business transaction with partners today; we’ll run errands, we’ll have dinner with longtime friends, we’ll come back to spend the night with my sister and her fur-bearing ‘family’. Seems like a useful enough day to me, especially if it culminates in a long night’s sleep before the next day. Hurray! Hurray!