Am I handy, or just a handful?

I’ve always thought of myself, without any implied value judgement, as an average person. But given my conviction that each of us is as distinctive as the proverbial snowflake, being average does not imply sameness in every way or with every one. After all, I have my distinctions, as anyone who knows me in the least can tell.

Still, in my particular milieu, those paths I’ve trod in my life’s journey as well as the matrix of my personal genetics and environmental influences, I have never tended to stand out from the crowd much. Some of that could clearly have been thanks to my preference for being a wallflower and remaining as invisible as I could manage during all of the years of my intense anxiety and self-doubt. But I really did blend in more than not, even when I felt like an emotional outsider. I’ve generally been just about smack in the middle of the majority wherever I’ve found myself in life.

Few are the superficial and visible things by which I can or could be easily singled out from a crowd. I am of approximately average height and weight, not particularly short or tall, thin or fat. I wear what I’m told are the average sizes in clothing—mostly Mediums, if not numerically average in a more specific way—and the most common size of women’s  shoes, those also in the medium width. I have brown hair; I have all of the standard, requisite limbs and appendages and other body bits in the ordinary places one would expect to find them, and a relatively symmetrical frame. I am neither notably hideous by popular standards nor a stellar beauty.

My education extended to college and a master’s degree, something not everyone has the wealth or privilege to experience, and I got pretty good grades all through, but again, nothing to put me on the map or anyone’s Specialness radar. My personal life, my daily activities, my work life: these are all unmarred by major peculiarities or notable oddments that would make me memorable to anyone who wasn’t already paying attention to me. What does all this mean? Is it unusual that I’m, uh, not unusual?

Nope. I think what it means is that each of us, unique in some ways, is utterly average in others. The world isn’t actually divided neatly into things, let alone people, able to be classified as belonging in a certain percentile as Normal or Average, above or below it, and remain in that category in all ways, for all time. Every one of us people, places, things, animals, vegetables and minerals seems to have a complex, and ever-changing, collation of classifications, each of our characteristics being at its own level, some of which levels vary over time and—

Oh, never mind. This could devolve into such a death-spiral of convoluted thinking that I might just explode into some sort of extraordinariness, if I’m not careful.

One sunny afternoon I went to a family and friends’ celebration, and I wanted the earth to swallow me whole. I’d that very week been diagnosed with clinical depression and anxiety; nobody there knew. Those at the gathering were celebrating religious and political beliefs that were virtually opposite to my markedly less conservative views. I was invited as a relative, and never knew if they really thought I shared their views or if it just didn’t matter. There was a lot of Bible reading, text interpreted to support favorite right-wing politicians. Many emotional speeches on the rightness and beauty of the group’s beliefs also implied that divergent views were stupid, evil or both. I wished I could disappear.

Mental health problems are inconvenient, messy, embarrassing. Incompatible philosophies and tastes, maybe even political or religious views, are sometimes socially acceptable as matters of personal leanings. But being exceedingly depressed or anxious?…

…since I seem to be in the mode of self-improvement. Or, more likely, just talking to myself as usual…

To the degree that anything I love requires a change

From normalcy into a state you might consider odd

Or simply having no real weight upon the native sod

Of humankind–that is, not kin to mortals and their sort–

Of disbelief (maybe disdain), I’ll not call it affront,

But pity you the sad refrain of living such a blunt

While I, adorned in fairy dust, take to the endless skies.

The School for Skeptics always has room for more . . . but should we be listening?

Who gets to define these? How, why, and for how long? How many centuries did it take for the earth to “become” round? I learned a wonderful thing about Truth and reality from my grandma when Alzheimer’s disease changed her from an ordinary human into a particular and new to me kind of visionary. I suppose I’d been around plenty of people before who, whether through illness or anomaly, through some life episode or misadventure or merely through the self-guided development of ingenious discovery or delusional ideation, saw the world and its verities quite differently from the majority of us others. But I don’t think I’d paid very close attention to what that might mean, before ‘meeting’ the new and different version of Grandma.

Grandma grew blurry . . . or was it only that the borderlands between our reality and another began to thin perceptibly?

She had already been moved into a lovely and much safer residence than her solo apartment, a place where she was fed properly, kept safe from rambling until lost, and tended like a well-loved family member, and she had begun very tenuously to adopt it as her home when I went along with my parents to visit her. Since she had acquired a roommate now and their quarters were modestly scaled, the other four of us strolled down to a pleasant sitting room nicely made for visiting. That is to say, Mom and Dad and I strolled, and Grandma rolled, now that she had completely forgotten she knew how to walk–except for rare occasions when, the staff informed us, she would simply get up and do whatever it was she wanted to do, then go back to her wheelchair and promptly forget again that she was quite fully ambulatory.

In the sitting room, which was comfortable and softly lit, there were several wing chairs and a small table with side chairs where guests could set cups of coffee or tea while socializing or perhaps play a game of cards if they wished; there were old-fashioned painting reproductions on the walls and dated but sweet wallpaper and there was a little arrangement of eternal, artificial flowers. There was also a bookcase, a fairly small one but basically empty, possibly because the residents in the dementia ward of the home didn’t quite know how to handle books gently enough any more or simply wandered off with them. We were curious and a little nonplussed by the place’s bothering to keep an empty bookcase around, but my grandmother wasn’t the least bit disconcerted. It was a quiet room and had an empty bookshelf because it was a Library for People Who Don’t Read. And that was that. It was funny, yes, but in addition it seemed, well, a little bit childish and decidedly more discombobulated than anything my former grandma, my actual grandma, would ever have said and I felt slightly embarrassed and more than a little sad. 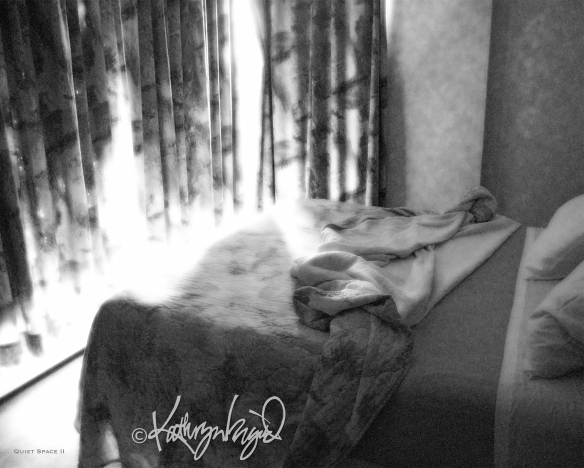 There are innumerable soft places for landing, but dare we visit them? Dare we stay?

She chattered a little, mostly in a nonsensical stream of short non-sequiturs, and eventually, grew a bit tired and weary and disappeared from the effort of conversation more and more until we thought she might just be falling asleep. So it was time for us to toddle off down the hallway to her own room again and make her cozy there. Her identification of the family photos on the wall was tenuous at best, and wholly disconnected from anyone in the room who happened to be represented in the photos. She told short stories that were part memory of long-ago times, part yesterday’s lunch, and part spontaneous fiction. She was quite taken with the tall evergreen outside her second story window. It turned out, she was mostly attracted to the man she saw sitting up in its branches there.

By then I was very tired too. It was mighty hard to follow these oddly disjointed and intermingled sentences and thoughts enough to attempt interaction with her anymore, and I was already sure that any comments I made or efforts to connect with what she was saying or thinking were pointless and soon forgotten anyway. I was very unhappy with myself for being so impatient and distracted and unable to just love this new and strange person living in Grandma’s shell. When the man outside her window was clearly more interesting to her than to me, I also became glumly frustrated with her lack of presence in reality.

It was then that I realized that Mom and Dad carried on the conversation with Grandma pretty much as though they could see the man up there too. They didn’t necessarily bait her or make things up willy-nilly, but they gently followed where she led and made no move to contradict her anywhere along the way.

I’m no genius. I think I’ve made that abundantly clear many and many a time. But it did finally occur to me that there was a perfectly reasonable reason to treat this whole interaction as though it were the most logical and natural thing in the whole wide world. Gently, my parents confirmed this bit of cosmic brilliance that had accidentally leaked into my small and putty-like brain. Which is, very simply, that we have no proof that there wasn’t a fella up in that cedar tree that Grandma could see, maybe even converse with somehow. Our failure to see him or understand what he was working to make known to us may very well have been purely a symptom of our being limited to our dimension or aspect of reality or interpretation of the universe, whereas my changed grandmother was now free to traverse the tesseract, leap the boundaries and see through the veil of human limitation at will.

Are all of the people who see, hear and believe things that others cannot see, hear or believe by definition wrong or damaged? Or is it just possible that there are realities and truths that we ordinary mortals of the majority haven’t the proper senses necessary for apprehending, that we can’t yet comprehend those particular particles? Something tells me it’s about time we come to our senses and allow that there may be a whole lot more going on than meets the human eye.

What do you see, now that you are so far away?