A more accurate name for this food would probably be something about snacking-as-dinner or Gustatorial Grazing, but it doesn’t have quite the same, erm, kick to it. The concept simply goes back to my perpetual preference for offering a wide assortment of things to nibble and letting everyone at table—or wandering around, as is the usual case when we have a houseful—choose his or her own combination of things to eat. Saves any tough decisions on my part and eliminates the complexity of trying to accommodate each person’s allergies and dislikes individually, as long as I don’t have any tiny persons of no discretion on hand and able to lay hands on everything.

I’m particularly fond of the ease of this approach when, as aforementioned, I have a big gathering of friends or family, but it’s also a convenient method for getting up a meal in a heartbeat when last-minute plans evolve. I found out the other day that we had a chance to see an old friend from Washington who was in town for one mere day; thankfully, he was here to consult with a good local friend, so the two of them wrangled their schedules to make it possible to take a dinner break with the two of us. Instant party!

I know that our visitor, while we’d not seen him here, has been to Texas before, but I didn’t know how much he’d had the typical local foods. As the weather was warmer and sunnier than expected, it seemed fortuitously apropos to put together something that had a hint of picnic, a touch of barbecue, a dash of Southern-ism, and a little Tex-Mex character, all in simple forms that could be served at room temperature and combined into whatever ad hoc plates-full we chose, and we could be as casual as we liked with our good friends.

I started with a quick cheat: pre-assembled jalapeño poppers I’d bought at the grocery, seeded jalapeño halves filled with cream cheese and wrapped in bacon. I roasted them in a cast iron skillet in the oven, knowing that this would also preheat the oven for much of the rest of the meal’s roasting.

I bought an array of vegetables, cleaned them and cut them into rough chunks, steamed the hard root vegetables partway ahead of time, assembled all of the prepared parts in a couple of big baking dishes, and loaded them up with butter and a bit of salt before they all went into the oven to roast together. Russet and sweet potatoes, carrots and beets all got the pre-roasting spa treatment of the steaming, and went into the ovens nestled with fat asparagus, whole ears of sweet corn, small bell peppers and chunks of lemon.

While all of those were roasting, I cut some skirt steak into fajita-sized pieces, seasoned them with cumin, smoked paprika, smoked salt and a little granulated garlic, and seared them before a nice braise in a bottle’s bath of Shiner Bock (a good Texas beer), cooking it all in until it candied into glaze at the last. Those went into a bowl to stay warm, and I took the skillet that was still filled with spicy bacon fat from the poppers and lightly cooked up the beet greens in that. When they were not quite cooked, I just took them off the cooker and let them steam in their own heat, covered. Meanwhile, the first dish of the meal was the last to be prepared: pimiento cheese. There would be salsa and crema on the table for dipping or saucing any and everything, but pimiento cheese seemed like a perfectly good addition to this melange of a meal.

Those who know the southern tradition of pimiento cheese know that the classic White Trash version of it is likely to be a combination of shredded Velveeta (something that is called cheese but bears little resemblance to it, in my book) and diced canned red bell peppers in a lot of mayonnaise, possibly with a little bit of cayenne and salt to season it. Like many regional staples, though, every household is likely to have its own variant, and many of the modern ones use cheddar cheese, the most meaningful improvement in the recipe I can imagine. I kept my own version simple but used lots of cheddar, a largish jar of canned pimientos, and a mixture of about half mayonnaise and half whole milk yogurt. I seasoned it all with only a touch of salt, a good dash of cayenne, and a teaspoon or so of dill. Not bad, if you ask me, on crackers or crisps or tortilla chips or, dare I say it, probably even in the great white trash loveliness of making it a sandwich on slices of squishy super-processed white bread. Y’all, let’s eat.

You know that one of my favorite things in cooking is when one meal or dish is flexible enough for the leftovers to be transformed into a different version for the next meal or dish without too much difficulty. Cooking once for two or more meals is preferable! This time it was easy to use several parts of the meal and tweak them into a couple of different modes for the following days.

Day One’s version was a steak dinner. The beef steaks were cooked sous vide with plain butter, salt and pepper and then pan-seared for caramelization, the pan deglazed with red wine for jus. Asparagus was steamed and refrigerated before a quick last-minute sear in toasted sesame oil and soy sauce and tossed with a sprinkle of sesame seeds for serving. Russet and sweet potatoes were cubed and oven roasted in butter, salt and pepper. And a room-temperature salad of sweet kernel corn had crisped bacon bits, diced and seeded tomatoes, butter and lemon juice and lemon pepper seasoning it. Dessert was a soft lemon verbena custard (just eggs, cream steeped with a big handful of fresh verbena leaves from the patio plant, vanilla, honey and a pinch of salt) topped with fresh strawberries in honey.

Next morning’s iteration: chop the remaining asparagus into small pieces, mix it with the leftover corn salad, stir in two eggs, pour it all into a buttered microwave-proof bowl, put a couple of small squares of sharp cheddar cheese on top, cover it to prevent spatter, and microwave this instant-omelet on High for about 4-6 minutes (‘waves vary) until done. Fast and tasty.

Dessert, later that day: another dish of lemon verbena custard, stirred with a tot of almond extract and a little ground cardamom and topped with sliced almonds and peaches. The beef was all gone at the end of the first meal, but even a few roasted potatoes of both kinds were left and made a fine mash with just a little extra butter and cream, and kept in the fridge for another meal yet. All this from one main preparation. Food is good. When it’s good enough, even better to get second helpings with ease.

A natural outgrowth of loving fat as I do is loving fried foods. There is a bit of truth in the claim that Texas is the heartland of all-things-deep-fried, and not only at the state fair (though that event lays a credible claim to being the epicenter of glorious fry-dom) but right on through this great and glorious state. Logically, living in this state should keep me in a state of bliss. As it happens, there are less than perfect and even somewhat horrendous fried foods (including at the State Fair of Texas, forgive me O sainted Big Tex), but there really are a whole lot of goodies that, no matter how swell they are from the beginning, get just that much better by virtue of bathing in hot fat until crispy.

My state of residence is far, far from the only place where recognition (or worship) of the marvels of frying food dwells. There is, of course, a long and respected tradition of such wonders, well documented in the great cuisines, from elegant tempura to calamari fritti (thank you, Chicago John!) and arancini, chiles rellenos and those magical Vlaamse Frieten of Belgian dreams. If it can be cooked, it has a good chance of being fry-able. Why, there are a number of foods that are treated to the process more than once, not least among them the ever-popular twice-fried tostones and Chinese green beans and leading up to such modern classics as that Southern inevitability, chicken fried bacon. Beyond that are the infinite possibilities of frying that the scientists of food never fail to pursue with great delight: long before state fairs all across the US got so seriously competitive about frying, to the point where they don’t even bother with any fatuous titular attempts to disguise the degree of culinary craziness and just come right out and call their recipes Deep Fried Butter and Deep Fried Sugar, there were pioneers of the art dunking candy bars, haggis, Twinkies [aficionados of the famed snack cake will be relieved that despite the demise of its American parent company the Canadian distributor appears to continue production] and pickled eggs into the hot oil at Scottish chip shops. 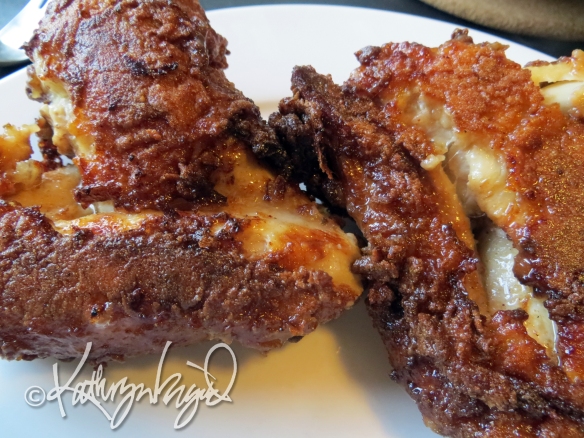 Despite all of the fantastic and phantasmagorical delights possible in the whole fried world, there are times when simple is grand enough. Think of oven fries–julienned Russet and sweet potatoes tossed with half olive oil, half melted butter and seasoned with lemon pepper and salt and chili powder (and rosemary, if nobody green-phobic is dining with you) and roasted in a medium oven until toasty and browning nicely–they go with practically anything, and are easier than easy to make. Then again, there are some of the classics that are well worth the mess and fuss. Fried chicken, for example. Coat it in buttermilk (or if you, like me, haven’t any on hand, in yogurt) seasoned with salt, pepper, cinnamon and cayenne and soaked for a couple of hours; shake off all of the excess yogurt or buttermilk and coat the pieces in a mixture of 1 part cornstarch, 2 parts fine masa, and 2 parts potato flour, seasoned with salt, pepper and chili powder. Fry until golden and finish in a medium oven–conveniently enough, the temperature used for oven fries works pretty nicely for such purposes. And coincidentally, one fried food (oven fries) tastes rather yummy when paired with, say, another one (fried chicken). Or so I’ve heard.

Another lunch, another assortment of dishes. I’m not much on trying to unravel what magical single dish or small group of dishes will satisfy every person at the table when I’m serving them lunch, so as always, when I had a few friends over a few days ago, I opted for my usual ‘safe’ approach of a larger number of smaller dishes. As I so rarely use actual recipes, I do tend to make up a menu in the form of simple notes, lists of ingredients, combinations, that sort of thing. Here we go. Imaginary eating is sometimes half the fun! 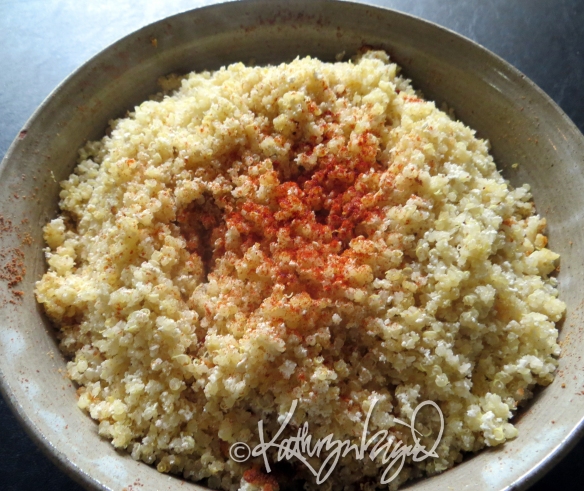 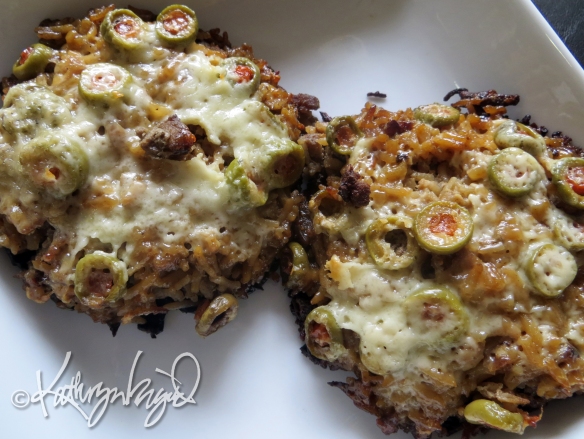 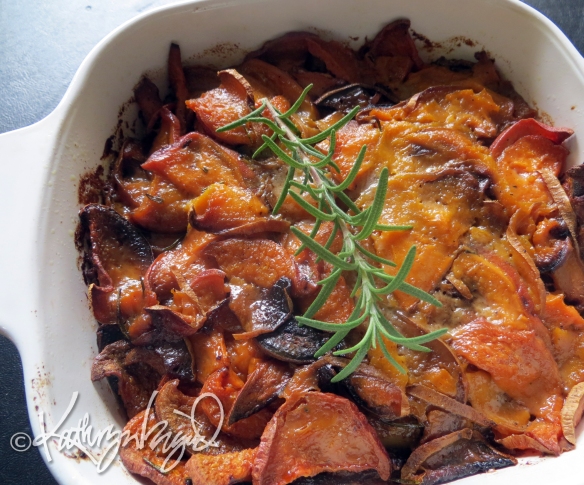 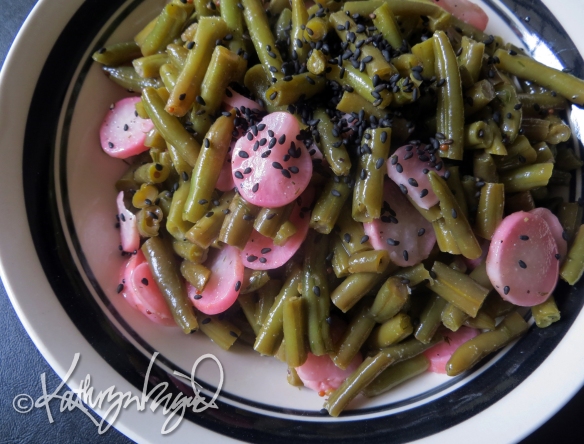 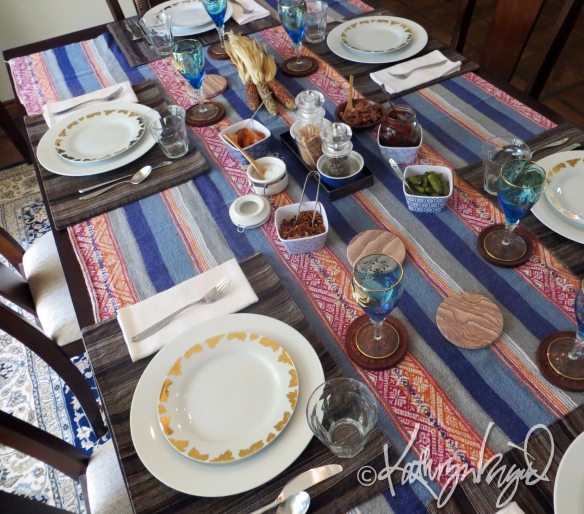