Every doorway, every window, every gate is a portal to adventure. It may well be that those  portals are locked when I approach. More often than not, I find that it’s I who locked them up, who put impediments in my own way. That is the price of fear, of laziness, and of self-doubt. What holds me back or shuts me out is rarely an insurmountable obstacle; it’s me, often and only me. If I want to grow and change, learn and progress, it’s up to me to find the openings I most want to explore, and challenge the barriers with all my might. If I can’t find the key, I should make one. And frankly, if I can’t do that, I should probably make some adventures of my own and not bother waiting for the right portal to appear. Knock, knock! Life calling!

A Map of the Interior

What lives inside my busy brain is far from France, the hills of Spain,

the Rio Grande, or the coast of Ireland, and yet almost

each single time I step inside, I see my thoughts roam far and wide,

as though the moment they begin, they light a universe within,

a place nobody else can sense, and yet it’s palpable, immense

and potent as no state on earth; this is my place of greatest worth.

If in your mind you travel, too, I hope the countries that are You

are equally enchanting, wide, and vivid, and that there inside

you find as you grow older, more great places that you can explore—

and if in old age we forget all else, we’ll have one journey yet

to places fond not left behind, the inner reaches of the mind. 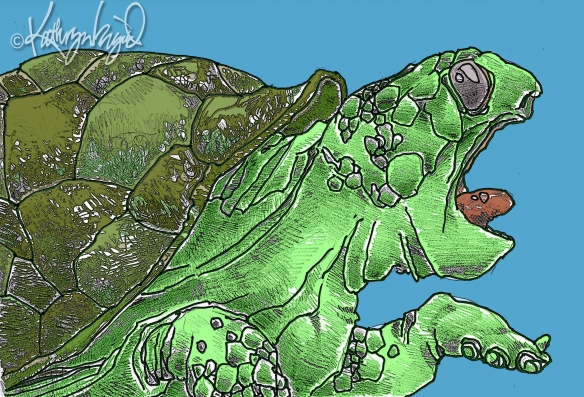 and off to the swamp in the jungle’s dim inner-

most sanctum they tracked her, observing her dinner-

time habits, behaviors and preferences; then,

It turns out she eats women and men.

Yesterday after running errands, we were reluctant to head directly home and do serious Work on a sunny Saturday afternoon, so first we took a couple of brief driving detours into the surrounding ranch-lands and enjoyed a uniquely lush and verdant north Texas spring outing, luxuriating in the marvels of denser woodlands, fuller runoff creeks and richer grasslands than we’ve yet seen since moving down here. Needless to say, we are reveling in the wealth of meadow and pastureland in the surrounding counties, as are all of the horse and cattle herds that didn’t get sold off or butchered outright to evade starvation and thirst in last year’s drought. It’s a beautiful prospect, this well-watered magic we have right now, and inspires the poetic in one’s spirit no matter how it defies other work. Far back among the rolling hills, Where prairie grasses sweep and bow

And the sweet wildflower spills Pour down the slope, the Angus cow

Set farthest back along the line Draws up her calf to join the herd,

Slow-swaying, toward a stand of pine; The rancher there, without a word,

Appears to bring an evening feed, And all the cattle on the clock

That balances content with need, Some time before, began this walk . . .

The way late Spring colors her days, As if instead of growing old

She’s only burnishing her tone The more to show her graciousness,

A radiant love of living things, Of all that’s sweet and warm and new,

Of leggy calves, of seed that brings That grass now banking up the slough . . .

The cattle walk, now, in their line, Their black flanks shaded in the dusk

With blue-tinged shadows, as a fine Light scent arises like a musk

From all their footsteps tapped in clay, Veils of the thinnest dust laid low

Between the sorghum rows’ array And that tall hayfield yet to mow,

And not one calf among them all Drifts off the center of the trail,

Because they sense their supper-call As sure as seasons never fail . . .